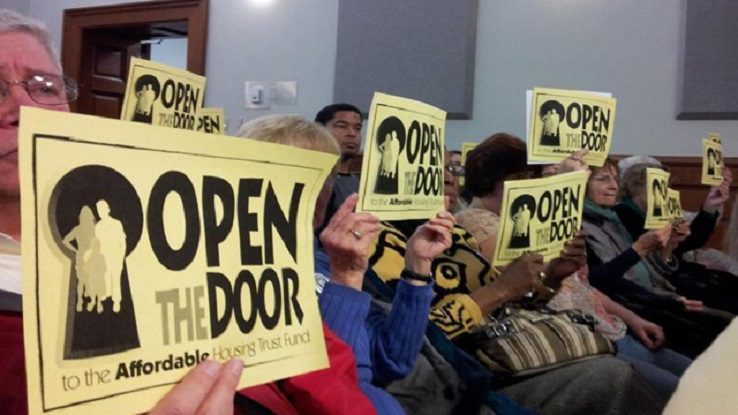 Housing advocates across Louisville, Kentucky celebrated the commitment of $2.5 million in the budget for the Affordable Housing Trust Fund—approved unanimously by Metro Council.  Created eight years ago, the Fund has suffered from the lack of on-going funds and this is the largest amount committed to the Fund since it was created in 2008.

The Affordable Housing Trust Fund was capitalized with an initial $1 million.  Subsequently, general funds have been allocated, contingent on raising matching funds.  And in 2012, the Fund received $250,000 from part of the National Mortgage Settlement Funds awarded to the State of Kentucky.  The Affordable Housing Trust Fund was established to invest public funds in the kind of housing Louisville needs: for people on fixed incomes like seniors and people with serious disabilities; for young families starting out; for veterans; and for working people whose wages are not enough to live in Metro Louisville. The Housing Trust Fund is founded on the principle that a place to call home opens the door to opportunity, and that the whole community does better when everyone has a decent place to call home.

Recognizing the growing need for affordable homes throughout Louisville, in 2004 Citizens of Louisville Organized and United Together (CLOUT) launched the campaign to establish an affordable housing trust fund in the city with a dedicated source of public revenue of $10 million a year. Soon other organizations such as the Metropolitan Housing Coalition, Coalition for the Homeless, Habitat for Humanity of Metro Louisville and others came together to form the Open the Door campaign. Working together, in 2006 they pushed successfully to secure a dedicated source of revenue for the state housing trust fund, and they continued the campaign in Louisville.

At CLOUT’s Nehemiah Action Assembly in April 2011, Louisville Mayor Greg Fischer committed to make it a priority of his administration to identify an ongoing dedicated source of public revenue for the Affordable Housing Trust Fund.  It is estimated that the goal of $10 million per year to support affordable homes in Louisville would produce 840 units of affordable housing per year, generate 1,120 jobs in the first year and 440 jobs every year thereafter, and produce some $60 million in local revenue in the first year and over $30 million every year thereafter.  A one percentage point increase in the insurance premium tax has been recommended, but there has not been enough support on Metro Council to approve it.  The tax increase is estimated to raise $10.5 million annually.

CLOUT leaders and allies have continued to share testimonies and data on the benefits of the Trust Fund during Metro Council meetings in 2015-16. In January 2016, CLOUT received major media coverage for publicly contrasting the city’s investment in the luxury housing at the Omni Hotel project (funded with $139 million in local & state taxpayer money) with the city’s lack of investment in affordable housing.  At CLOUT’s Nehemiah Action Assembly in March 2016, Metro Councilman and Democratic Caucus Chair Bill Hollander (D-Dist. 9) committed to advocate for an allocation of $5 million for the Trust Fund in the 2016-17 city budget, and to work with CLOUT to secure dedicated funding for the Trust Fund in the future.

In April, CLOUT invited the Young Poets of Louisville to participate in the campaign by delivering a poetry slam at a Metro Council meeting. Three high school students vividly called on Louisville’s public officials to address the city’s critical housing needs.  Click here for a link [the inspiring poetry slam begins at about 6:30 into the council session].   In May, CLOUT also collected more than 1,200 signed letters and along with the Executive Director of the Louisville Affordable Housing Trust Fund and Metro Councilman Bill Hollander (D-9) took to the steps of city hall to once again ask the Mayor to support the Trust Fund.

Late in May, Mayor Greg Fischer released his budget plan, including the $2.5 million for the Affordable Housing Trust Fund, and Metro Council approved it unanimously shortly after that.  Beverly Duncan, CLOUT’s co-president welcomed the funding decision saying: “We are glad, certainly, but we will keep working to get Metro Council to identify and secure an ongoing dedicated source of public revenue for the fund over the next few months.”

As CLOUT celebrates 25 years of advocacy in Louisville—this video portrays the commitment and impact of its ongoing work — and other Open the Door allies continue to build support for a dedicated source of ongoing public revenue for the Affordable Housing Trust Fund.  The current availability of $2.5 million will undoubtedly demonstrate the true impact an ongoing commitment can make in providing affordable homes for Louisville.