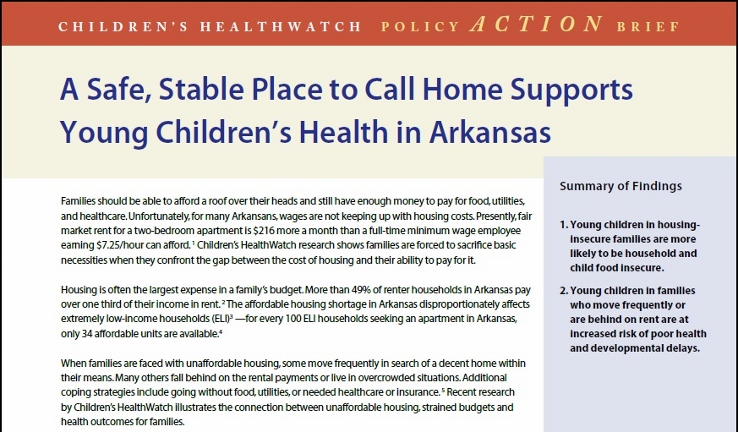 One of Housing Arkansas‘ initiatives to build support for the Arkansas Housing Trust Fund included an interesting collaboration with Children’s HealthWatch pediatric researchers located at Arkansas Children’s Hospital on the release of A Safe, Stable Place to Call Home Supports Young Children’s Health in Arkansas.  Children’s HealthWatch is a pediatric research organization that works to improve child health by bringing evidence and analysis from the front lines of pediatric care to policy makers and the public.  Supported by the MacArthur Foundation’s How Housing Matters initiative, the Safe, Stable Place to Call Home report highlights analysis of survey data collected between 2005 and 2011 from caregivers on the impact of housing insecurity on the health and development of young Arkansan children. 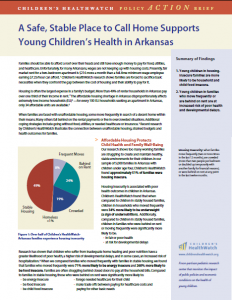 In 2011, Housing Arkansas began conversations with Children’s HealthWatch about the report, and the potential for collaboration around its release.  Housing Arkansas was very interested in promoting the report because the public opinion research indicated that Arkansans overwhelmingly support healthy and safe homes for children.  Children’s HealthWatch was interested in connecting the report to state-level policy solutions that improve health outcomes for children.

“As soon as we started talking, we realized we had common interests,” said Steve Copley, Chair of Housing Arkansas.

Children’s HealthWatch welcomed Housing Arkansas’ input on the message frames, incorporating the tested language in the title and throughout the report.  On July 30, 2012, Copley and Dr. Patrick Casey were interviewed by the press after the report was announced in a press release.  Copley  proposed state investment in the Arkansas Housing Trust Fund as a policy solution for Arkansas children facing housing insecurity.

“Working with Housing Arkansas was ideal,” said Stephanie Ettinger de Cuba, Research and Policy Director for Children’s HealthWatch.  “Research that is not presented in a way that resonates with people, especially decision-makers,  or seem relevant in their world is impractical.  We want our research to be used to advance policies to improve the lives of children.  Increasing the supply of healthy, affordable homes is absolutely one of those policies.”

Children’s HealthWatch provided Housing Arkansas with hard copy versions of A Safe, Stable Place to Call Home, which Housing Arkansas members have used in legislative visits and communication trainings. “What is great about the report is that it is succinct and easy to read—which is what you want when you are trying to catch the attention of a legislator,” said Copley. “Having hard data also reinforces the message frames about children, which helps builds confidence for the advocates as they use these messages.”

Ettinger de Cuba emphasized the benefits of being in dialogue with Housing Arkansas while Children’s HealthWatch was in the process of writing the report. The message frames helped ensure the report would resonate with the public and media.  Housing Arkansas was able to review drafts and provide feedback. As a practice, Children’s HealthWatch seeks out input from advocates who are expert in their field to ‘ground test’ reports before they are released.

“I think most public health researchers are thrilled when they can connect to advocates working on their issue,” said Ettinger de Cuba.  “I would encourage advocates to pay attention to research that is happening at local universities and to reach out to researchers when you see a potential opportunity.”

NEXT MacArthur How Housing Matters Survey Indicates Attitudes Towards Renters Are Changing, Improving