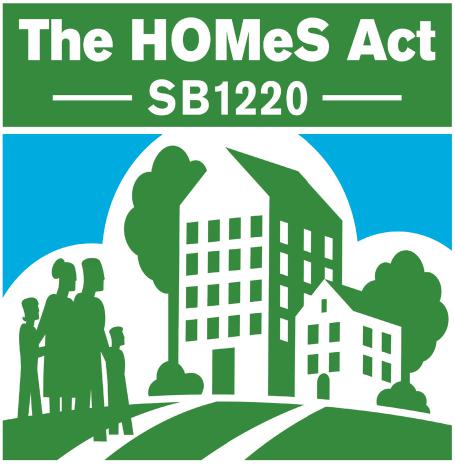 California affordable housing advocates are actively engaged in a statewide campaign to secure a dedicated revenue source for a state housing trust fund. SB1220 introduced by Senators Darrell Steinberg and Mark DeSaulnier and Assemblywoman Toni Atkins would impose a $75 fee on the recordation of certain real estate documents and place this revenue into the Housing Opportunity and Market Stabilization (HOMeS) Trust Fund. The measure requires a two-thirds vote in both houses of the state legislature to be enacted.

The trust fund would support the development, acquisition, rehabilitation, and preservation of homes affordable to low and moderate income households, including emergency shelters, transitional and permanent rental housing, foreclosure mitigation, and homeownership opportunities. The bill imposes the fee on the recordation of each real-estate document, excluding documents related to the sale of a property, in order to permanently fund the Housing Opportunity and Market Stabilization (HOMeS)Trust Fund. It is estimated that this fee will generate an average of $525 million per year for the HOMeS Trust Fund.

California has a strong and sophisticated capacity to address affordable housing, but available resources have plummeted. In 2000 and 2006, voters approved roughly $5 billion in housing bonds. These funds have financed the construction, rehabilitation and preservation of more than 11,600 shelter spaces and 57,200 affordable apartments, including 2,500 supportive homes for people experiencing homelessness. In addition, these funds have helped 57,290 families become or remain homeowners. Nearly all of these funds have been awarded. Exacerbating the situation, California’s re-development agencies used to generate some $1 billion per year for affordable homes as a result of the requirement that they set aside 20% of tax increment revenues for affordable housing. With the recent elimination of redevelopment agencies statewide, this funding stream has disappeared.

The campaign has created several focused activities for advocates to engage in and to build effective ways to reach legislators. Different weeks are designated for targeted constituent letter writing. One week all homeless service providers, homeless shelters, and homeless advocates were encouraged to write letters. In subsequent weeks, different constituencies will be engaged, including veterans, nonprofit developers, and others.

Regional trainings were sponsored to prepare and train advocates to engage others, plan effective legislative visits, use powerful communication strategies, and become key members of the campaign. Housing California has a toolkit available on its website (www.housingca.org) containing information on activities, fact sheets, messages, support letter templates, and ways to get involved. 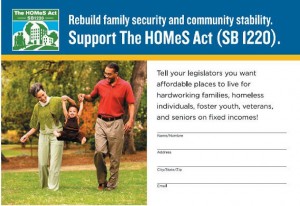 A postcard campaign has been launched, generating thousands of postcards signed by housing advocates, residents, allies, friends and others to let legislators know how many people care about the need for affordable homes in California.

Lobby Day is scheduled in April to match the first day the bill will be heard by the first Senate Committee. The day is organized to include a training for all advocates, lobbying visits with key legislators, and an opportunity to attend the hearing on the bill in the Senate Transportation and Housing Committee.

The administrative and program details for the HOMeS Trust Fund have yet to be worked out. California created a state housing trust fund in 1985 but has never had a sustainable source to fund it. With declining federal funds to support affordable housing and homeless needs, California faces a quite critical period in which funds are vanishing and housing needs remain at alarming rates. From 2007-2009, California lost more than 95,000 construction trade and related jobs, according to the California Employment Development Department.

“The HOMeS Act takes a significant step towards ending homelessness and helping hun-dreds of thousands of Californians find safe and affordable homes,” said Shamus Roller, Executive Director of Housing California. “Hardworking families should be able to afford housing and still have money for groceries and other necessities.”