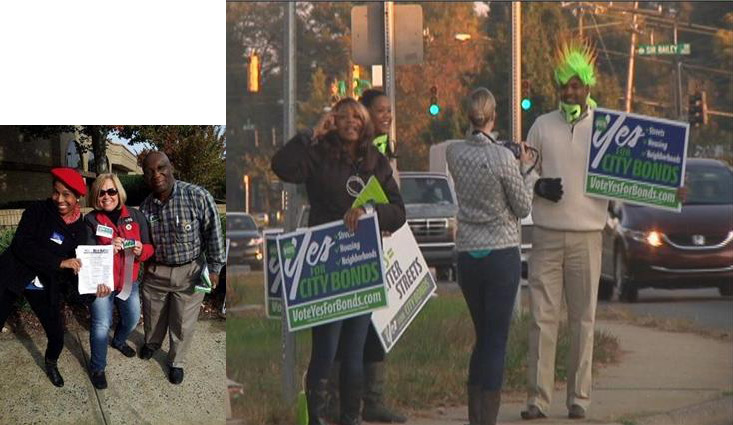 The voters of Charlotte, NC approved $146 million in bonds in November 2014:  $110 for street improvements, $20 million for neighborhood improvements, and $15 million for low-income housing.  The Charlotte Housing Trust Fund will use the funds to provide affordable homes for low and moderate income households.  Each bond won by more than 60% of the vote.  The bonds are essentially paid for by an increase in property taxes that occurred in 2013, so this vote did not raise property taxes to pay for these improvements.

Preparation for this vote began two years ago. The Charlotte Chamber ran the campaign with support from Vulcan Materials Company, Crisis Assistance Ministry, University City Partners, Greater Charlotte Apartment Association, Supportive Housing Communities, the Real Estate and Building Industry Coalition, American Airlines, plus many others. The Black Political Caucus of Charlotte-Mecklenburg voted to endorse all three bonds on the ballot. The City also plans to ask voters to approve bonds in 2016, 2018 and 2020 as part of the Community Investment spending program.

The Vote Yes For City Bonds campaign deployed teams of volunteers at high-traffic spots around town before voting day to raise awareness of the importance of voter support.  Eight “trick or treat” teams were spread out across the city with posters.

The Campaign pushed active facebook, twitter, yard signs and other attention-getters; the campaign was highlighted through strong political and media backing; and campaign information focused on the benefits voters would see from investing these funds, including: a 26-mile multi-use trail; affordable homes for seniors, persons with disabilities, and mixed income communities;  street improvements in selected neighborhoods, etc. To learn more about the campaign, click here.

Since that time, the housing trust fund has financed 5,122 new and rehabilitated affordable housing units. Of that total, 2,836 were for people earning less than 30% of the area median income, or under $19,250 per year, making Charlotte more affordable for pre-school teachers, health-care aides, and workers in hospitality, retail and emergency services. The City of Charlotte has committed $86 million to the Housing Trust Fund. The Housing Trust Fund is administered by Neighborhood & Business Services, Housing Services Division of the City of Charlotte.

The new $15 million approved for the Housing Trust Fund will support multi-family new construction and rehabilitation; homeownership development in targeted neighborhoods; housing for seniors, disabled and homeless populations; and acquisition of properties for developing mixed-income communities.

NEXT As National Housing Trust Fund Nears Reality, Advocates Still Have Work to Do