With bragging rights to being the first state to end chronic homelessness for veterans, Connecticut advocates have also seen other positive outcomes from Governor Dannel P. Malloy’s housing blueprint proposed in February 2015.

While the budget provides only a portion of resources for key state housing programs, the outcome of this budget cycle included up to $20.3 million for the Community Investment Act funding over the biennium, of which 25% is authorized for housing homelessness programs (these revenues come from document recording fees).  The Act provides increased funding for open space, farmland preservation, historic preservation and affordable housing.  Monies coming to the CT Housing Finance Authority from the Community Investment Act are used for a single family mortgage program, a predevelopment loan program to assist nonprofit developers, a pilot program to provide technical assistance to help suburban and rural communities with the development of affordable housing, and funding for the Tenants Special Opportunities Families Fund which helps public housing authorities take steps to improve the living environment for their tenants.

The bond bill provides housing or housing-related capital funds for various agencies, including $40 million in FY2016 and $25 million in FY2017 to the Department of Housing for the state’s Housing Trust Fund.  The Housing Trust Fund Program began in 2005 and provides gap financing, grants, loan guarantees, low-and no-interest loans, and funding for the Connecticut Individual Development Account housing program. An Advisory Committee advises the Commissioner on the management and objectives of the program, and on the development of regulations, procedures and rating criteria for the program. The Housing Trust Fund program is designed to create affordable housing for low and moderate-income households and promotes homeownership; the rehabilitation, preservation and production of rental housing; and the development of housing which aids the revitalization of communities.

Connecticut has a third housing trust fund which receives interest from broker real estate escrow accounts and repayments on loans but its revenues have dropped dramatically since 2008.  Since its inception, the Interest on Real Estate Brokers Trust Account (IOREBTA) Program has realized $8,952,567 in interest on the escrow accounts of 1,127 participating brokers. IOREBTA funds have supported appraisal gap financing for first-time homebuyers, supported the development of affordable housing projects, counseling for low- and moderate-income homebuyers, second mortgage down payment assistance when the State’s Down payment Assistance Program was suspended, and the purchase of mortgages from Connecticut Chapters of Habitat for Humanity.

While the Governor’s understanding of and support for affordable homes for all is impressive, advocates across the state provided input on the budget and testified in support of it until it was adopted.  The collaboration among advocates, the Governor, the Commissioner of Housing, the legislative leadership and key committee chairs created a strong force that won.  People across the state heard about and understood the issues at hand as advocates were persistent in getting around to towns and talking about why it is in their interest to create a wider array of housing options. 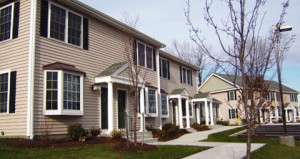 Sunrise Terrace in Danbury, CT. The Midwestern Connecticut Council of Alcoholism, Inc. is the primary provider of substance abuse prevention, evaluation and treatment services in the greater Danbury area.

The Community Investment Act provided more than $200,000 in funding to assist in the rehabilitation of two buildings creating eight supportive housing opportunities in Danbury.  This is being completed in concert with the State’s Supportive Housing PILOTS programs.  The total initial investment in Sunrise Terrace of $2.44 million generated $3.76 million of economic activity.  Of the 28 new jobs created throughout the state economy, 18 jobs were in construction, seven in the service industries, three in the wholesale and retail trades, one in finance, insurance and real estate and five in manufacturing.  Net state revenue amounts to $290,000 million in 2011.

NEXT Housing Trust Fund: One Answer to Gentrification in New Orleans