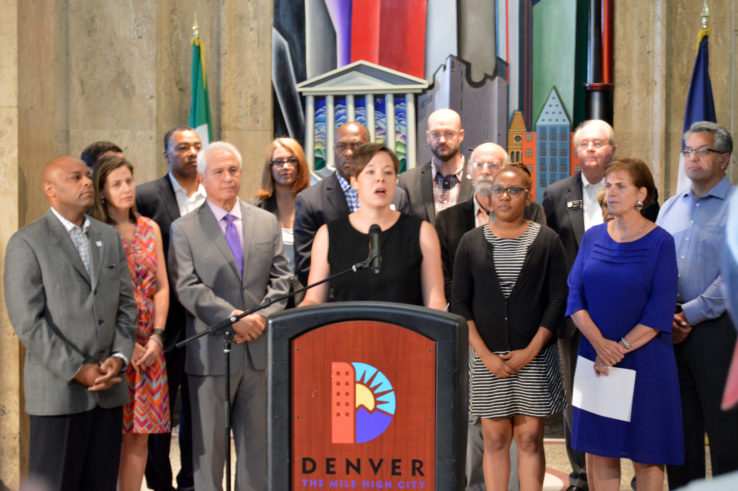 Responding to the needs of tens of thousands of Denver households currently in need of affordable housing, the Denver City Council, by a vote of 9-4, passed ordinance that dedicated two funding sources and established a housing trust fund.  The housing trust fund will receive revenues from impact fees on new development projects and an existing property tax that will generate at least an estimated $150 million over the next decade to create or preserve at least 6,000 homes for low and moderate income families by 2026, at which point the Housing Trust Fund will sunset.

The impact fees, also called linkage fees, range from $0.40 to $1.70 per square foot, depending on the type of development project. The property tax will cost the owner of a $300,000 home about $12 a year. Accessory dwelling units are exempt from the development impact fee.

A combination of strong leadership from members of the Denver City Council, full commitment from a broad set of stakeholders, extensive media coverage and a highly engaged and supportive public spurred the City Council to create the housing trust fund.  Like many cities, Denver has experienced a rapid rise in the cost of housing coming out of the recession, leading to gentrification in many neighborhoods that threatens to displace long-term residents, and an increase in the number of people experiencing homelessness.  In 2015, Enterprise Community Partners and the Neighborhood Development Collaborative began working with Councilwoman Robin Kniech and (current) Council President Albus Brooks to pursue a housing trust fund as a policy response to the City’s housing crisis.

In September 2015, Councilwoman Kniech convened the Housing Revenue Stakeholder Committee, a 70-member body representing housing experts, industry/business associations, neighborhood groups, developers, homeless providers, city commissions, and other organizations.  The group met 10 times in the next year, reaching strong, although not unanimous consensus that supported the creation of a housing trust fund with combined dedicated revenue from the property tax and linkage fee.  The committee reviewed case studies from other cities, reviewed a Nexus study commissioned by the City to determine appropriate linkage fees for Denver, and reviewed the final proposal that was presented to City Council in July 2016.  The participation and inclusion of developer voices as well as community voices on the committee was absolutely crucial in building the support on Council to enact a linkage fee tied to development.

Simultaneous to building support on City Council and through the Housing Revenue Stakeholder Committee, Enterprise Community Partners, the Neighborhood Development Collaborative and fellow housing and homeless advocacy organizations submitted letters to the editor and Op Eds to the Denver Post and other media outlets to demonstrate strong public support for the creation of the housing trust fund.  The Denver media had already been covering the growing housing crisis as an emerging community concern, and thus when Council members, stakeholders and at-large public all started focusing on the housing trust fund as a policy solution, the media followed the story with great interest, publishing more than sixty news and opinion pieces in the twelve months prior to the Council vote to establish the housing trust fund. 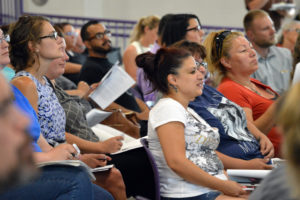 What pushed Council support over the top was the overwhelming public support for enacting the property tax and linkage fee from a broad array of Denver residents at two Public Meetings held April and July, 2016 as well as the subsequent Council hearings on the housing trust fund proposal.  More than 350 people attended the April Public Meeting on the proposed revenue sources and priority uses for the fund, followed by nearly 200 people attending the July meeting on the final proposal.  Participants included residents of affordable housing talking about the positive impact having an affordable place to live has had in their lives, community members in immediate need of housing talking about their struggles to stay in the City, and other Denver residents who were concerned about how the cost of housing is stressing the fabric of the city they love.  Key to turnout were organizations including LiveWell GES and Servicios de La Raza that mobilized people directly impacted by the lack of affordable housing.

“The most innovative part of this victory was that community groups, grass tops and grassroots, housing and non-housing related organizations, and members of the city government all worked together to get this fund passed, and that is not something you see very often in Denver or anywhere else,” said Tiana Patterson, Program Officer with Enterprise Community Partners.  “The key was that from the very beginning we kept the doors open to bring in as broad a group of supporters as possible, including people and organizations that work on issues impacted by the availability and affordability of housing, but who have not been invited to a seat at the table in past advocacy efforts—be it members of the development community and the business sector to nonprofits working locally in neighborhoods to concerned citizens who want better for Denver.”

The dedication of the property tax and implementation of the impact fees will take effect January 1, 2017, and are expected to generate $10 million in the first year.  The proposed budget from Denver Mayor Michael Hancock includes an additional $5 million one-time infusion which will come from a combination of human services, general fund and marijuana special sales tax revenues. The property tax and one-time funds will be available right away, January 1, while linkage fees will be deposited into the fun as they are paid by developers. The City’s plan calls for the development of 653 new income-restricted apartments and homes, and to provide at least 250 households emergency housing assistance in the first year.

Rental housing funded through the housing trust fund will serve households from 0 to 80 percent of the area median income. For-sale affordable housing programs funded through the housing trust fund could serve families up to 120 percent of the median income, or $96,120 for a family of four. The Mayor’s office will convene a 23-person advisory committee to determine how to allocate and optimally leverage trust funds, including setting funding priorities, and fund administration. Denver’s Office of Economic Development city will design and use a competitive process to solicit proposals from non-profit and for-profit developers. The city’s proposal sets an eight percent cap on administrative/overhead costs for overseeing the new fund and getting projects into the pipeline and out the door. The housing plan also requires the mayor and the city council to create a citywide comprehensive housing plan, which is expected to be completed and adopted by September 2017.

To learn more about the Denver housing trust fund, go to the Denver Office of Economic Development website.