After a long city council meeting on October 10th, the Evansville, Indiana City Council passed their 2017 budget that includes new funding for the Affordable Housing Trust Fund. CAJE (Congregations Acting for Justice and Empowerment, a DART affiliate, has been working hard for nearly two years to garner city council’s support for revenue for the Evansville’s Affordable Housing Trust Fund (AHTF).   That hard work has now paid off.

In 2017, the AHTF will receive $500,000 dollars from a public land sale to the Tropicana casino. The Director of the Department of Metropolitan Development (DMD), Kelley Coures, also outlined in his Capital Improvement Plan budget for the coming years a funding source of $250,000 dollars for the trust fund each year.  While the $250,000 will need to be approved again next year for 2018, the City Council knows that it is in his plan.

CAJE leader Rich Coulter attributed their success to “persistence, persistence, persistence.”  No truer statement has been made.  The AHTF was passed in 2002 with CAJE’s organizing.  And a few years later, approximately a half million dollars of a one-time allocation was deposited into the Fund.  That quickly dried up as the money was given out and resulting in no activity with the AHTF for several years.

In November 2014, CAJE’s congregations  voted to address the community’s lack of affordable housing crisis.   CAJE put on the heat in the Spring of 2015 at their Nehemiah action.   At the meeting they put the Mayor on notice that their members were serious about pursuing revenue for affordable homes.  As CAJE leader Vel Sitzman said about why housing is important, “… because everyone deserves to have a roof over their heads.  The thought of families working 2-3 jobs and still unable to afford rent is appalling.”

Leaders worked throughout 2015 doing research on the history of the AHTF in Evansville, the need for housing in their community, how other communities have used an affordable housing trust funds, building relationships with housing developers and service providers.   Even though they were able to present a strong argument to the mayor’s office and city staff on the need to provide the revenue for the Fund, they still did not have a commitment.

Since the city still needed convincing, the Housing Trust Fund Project worked with CAJE to set up a site visit to Nashville Tennessee in March 2016.  CAJE brought some of their leaders, two Evansville city officials, two major affordable housing providers and a reporter to Nashville to learn about the need for dedicating a revenue source for their housing trust fund. They were toured by Urban Solutions and others to study the impact of the Nashville housing trust fund, called the Barnes Fund for Affordable Housing.  They met with Metro Council members, the Mayor of Nashville and the Barnes Fund committee.  The site visit to Nashville was a new tactic for CAJE and was successful in multiple ways: learning about revenue sources, uses of land banks, how affordable homes contribute to a city and built excitement that Evansville too can use their trust fund to alleviate the affordable housing crisis in their city.  See more on the visit through a storify click here. 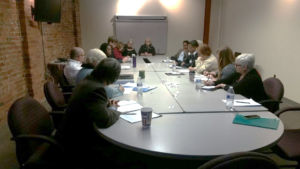 Following on the Nashville visit, CAJE held their annual Nehemiah Action in April 2016, at which the Department of Metropolitan Development Director, Mr. Coures agreed that he would ask Council to dedicate between 2-5% of the Tropicana casino dollars for the Evansville trust fund.  The DMD director’s support also meant the Mayor’s support for the revenue source.  CAJE members celebrated this step but knew they had to take their work to the finish line.  From April to the October vote, CAJE members continued to meet with City Council members to educate them on the need and on a solution, the AHTF revenue source, to Evansville affordable housing crisis.

When asked about the campaign for the AHTF, Vel Sitzman said, “For over two years we researched and questioned and at times it was frustrating when nobody would seem to listen.  God gave us the strength to continue and now we have people who are listening and helping.  We must stand strong and always be willing to fight for what is right. We must never become complacent.”

When asked about the AHTF victory and CAJE’s next steps, leader Marcia Ballard responded, it is “good, but it is only a start. I also see that CAJE will need continuous diligent advocacy for 1) the funding of the Affordable House Trust Fund and 2) transparent, innovative and just distribution of the funding.”

As stated by leaders, CAJE plans to continue to bring housing justice to Evansville by participating with the AHTF’s advisory board to educate potential recipients about the Fund and to spend the money effectively and efficiently.  CAJE leaders know if they can show the success of the Fund, they’ll be albe to convince the community and City Council to expand the Fund.  In that vein, leaders want to see the funds dedicated not just allocated so that the community can plan longer term responses to the housing crisis than by a year by year allocation.

For more information on the CAJE and the Evansville campaign contact: CAJE (Congregations Acting for Justice and Empowerment,