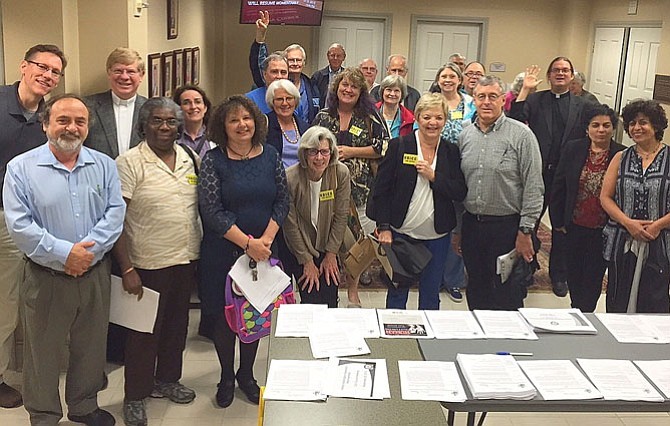 On September 29th, the Fairfax City Council unanimously approved the city’s first affordable housing policy. For three years, VOICE (Virginians Organized for Interfaith Community Engagement) and other community advocates campaigned for more affordable homes in the City of Fairfax, Virginia. The resolution adopted by the council includes templates for voluntary conditions for development projects that come to the council for approval. For rental projects, developers are asked to rent 6% of their apartments at affordable rents. For projects that are for sale, developers are asked to provide cash contributions up to $6,036 per unit into a housing trust fund. VOICE wants the City Council to go further, changing the voluntary conditions to required conditions by incorporating them into the city’s zoning ordinance.

Work on the policy started in 2013, after a VOICE action on the proposed demolition of 110 affordable apartments sparked them to pursue a citywide approach to including affordable homes in development projects. In the summer of 2014, VOICE conducted an in-depth survey of more than 150 working families about their work and income. The findings revealed a critical need for housing for families earning between $25,000 and $65,000 per year, approximately 60% of the AMI and below.  These families include nurses, teachers, construction workers, childcare workers, cooks, waiters and retirees who mostly live and work in the City, but find themselves increasingly priced out of it due to escalating rent costs.

In addition to the survey, in 2014 VOICE members worked with residents of the Oak Knolls Apartments, built in 1962 and more affordable because of their age. The owner planned to demolish and replace the building, and VOICE helped tenants communicate their concerns to city leaders.

VOICE continued to pressure Council and the Mayor to finalize the guidelines in 2015. In February, the Council approved a mixed-use project that blends commercial and up-scale apartments. With community pressure, the developer agreed that 6% (24 out of 403) of the multi-family rental homes would be set aside for people at 60% of the AMI for Fairfax City.  In May, the owner of Oak Knolls Apartments asked for Council approval to demolish the existing 110 apartments and replace them with 102 condominium units and 30 townhouses. Because this project has no rental units, setting aside units to rent at below market rate wasn’t feasible. Instead, again with community pressure, the developer agreed to provide a $550,000 cash contribution for affordable housing and $1,000 to each tenant for relocation expenses.

The actions for these two developments helped to set the stage for September’s vote on the affordable housing policy.  The Council unanimously approved the policy and Mayor Silverthorne thanked the community members who’ve worked so hard on this issue, some for three years. “This is a far stronger and better policy today than it would have been then,” he said. “And it puts the development community on notice, as well, that the City is serious about affordable housing.”

Councilman David Meyer also thanked VOICE for “being a voice of conscience. We talk a lot about community, and I believe it’s where there’s a heartfelt and substantive commitment to one another, as well as economic diversity. I’d like us to bring on as many affordable-housing units as possible. And in the future, I’d like us to appropriate money for affordable housing. This is a significant milestone in the journey, but we have a long way to go.”