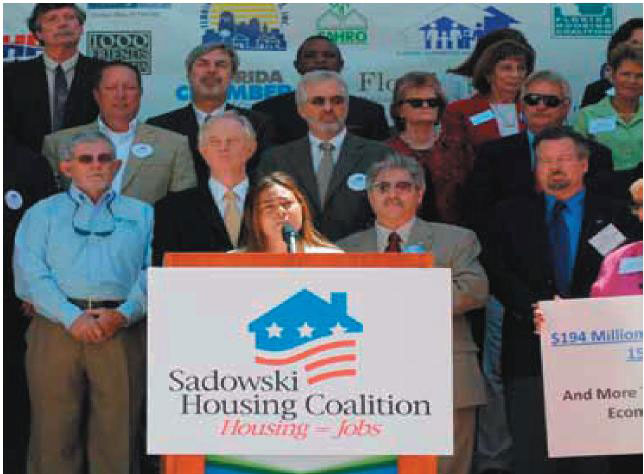 For the last ﬁve years, the William E. Sadowski Coalition’s priority has been to repeal the cap placed on the state and local housing trust funds in Florida put into place in 2007. The William E. Sadowski Affordable Housing Act was passed in 1992 and dedicates a portion of the documentary stamp tax paid on real estate transactions and directs those resources into Florida’s state and local housing trust funds. Since 2007, after the dedicated revenue reached $243 million, any additional monies were diverted into the general fund.

This year, with the passage of HB639, the campaign to repeal the cap has ﬁnally come to a successful conclusion. As the real estate market recovers, the documentary stamp tax collections will increase and provide much needed revenue for affordable housing. 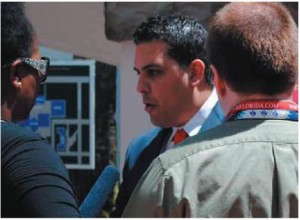 FLORIDA HOUSING COALITION – Associated Industries of Florida being interviewed by reporters after Housing Day Rally at the Capitol. Business and industry groups continually stressed the connection between housing and jobs.

Representative Gary Aubuchon (R) and Senator Mike Bennett (R) championed the repeal of the cap. The Florida Housing Coalition and its members worked tirelessly on this campaign, including: Habitat for Humanity of Florida, the Florida Supportive Housing Coalition, the Florida Coalition for the Homeless, the Florida Realtors, the Coalition of Affordable Housing Providers, the Bankers, and all the individual and local organizational members of the Florida Nonproﬁt Housing Advocates Network.

The centerpiece of HB639 was the repeal of the cap, but the 32-page bill contains a number of other provisions, including a ﬁnding that “due to the current economic conditions in the housing market there is a critical need to rehabilitate or sell excess inventory of unsold homes, including foreclosed homes and newly constructed homes as well as a critical need for the rehabilitation and preservation of older, affordable apartments … and that there is a critical need to create housing related jobs and that these conditions require the targeting of state and local housing trust fund moneys for those purposes.” The “no new construction” provision expires July 1, 2012.

The Florida legislature also created the Department of Economic Opportunity and reorganized state agencies. In addition, the State Economic Enhancement Development trust fund (SEED) was created and funds from the state and local housing trust funds are permanently redirected to the newly created SEED trust fund. This proposal from the House was the alternative to the Governor’s proposal to permanently eliminate the state and local housing trust funds and the Senate’s proposal to permanently redirect all the dedicated funds to the general fund.

Affordable housing is an express purpose of SEED. As SEED currently stands, it is not self implementing, as it does not prescribe the manner in which applications are to be made and does not provide criteria for awarding funds. The concept is that the legislature sees a business plan before they create the administrative system and appropriate funds.

Dedicated revenue to the State and Local Housing Trust Funds in Florida must be appropriated. For the last two years, the State Housing Initiative Program (SHIP) program has not been funded and this will be true for FY11-12. Repealing the cap on the trust funds will not matter to a county that will soon have to close its housing development for lack of SHIP funding.

The estimated $194 million available for appropriation from the state and local housing trust fund would have created approximately 15,000 jobs and more than $1.4 billion in economic activity. The political priority was jobs creation, so it seemed to housing advocates, including the entire Sadowski Coalition, that this would be the year to use the housing trust fund monies for housing—putting the out of work contractors back to work rehabilitating foreclosed homes and moving existing inventory to light a ﬁre under the real estate market.

The bar graph illustrates that over the next eight years, the Housing Trust Funds are projected to receive $2.3 billion in doc stamp monies, more than $392 million of which would otherwise have gone to general revenue if the cap had not been repealed.

The September conference of the Florida Housing Coalition will focus on strategies for restoring full funding of the state’s model housing programs.

Jaimie Ross
President of the Board of the Florida Housing Coalition
and Affordable Housing Director for 1000 Friends of Florida
P.O. Box 5948, Tallahassee, FL 32314
(850-222-6277)
Jaimieross@aol.com
www.ﬂhousing.org