Hawaii affordable housing and homeless advocates won a commitment of $40 million in bond financing for the Rental Housing Trust Fund in the FY2016 state budget negotiations.  This is significantly more than the legislature has approved in  recent years.  The Rental Housing Trust Fund was created in 1992 and receives a 50% of revenues from the state’s conveyance tax up to $38 million a year.  As of 2014, the Fund has helped support more than 5,000 rental homes throughout Hawaii. 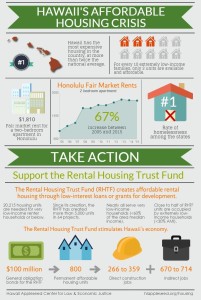 Several advocacy groups have been collaborating through PHOCUSED (Protecting Hawaii’s Ohana, Children, Under-served, Elderly and Disabled).  Ohana means family in the Hawaiian language.  Catholic Charities Hawaii, Hawaii Appleseed Center for Law and Economic Justice, EAH Housing, FACE Hawaii (Faith Action for Community Equity) and many others have worked intensely to increase the state’s commitment to investing in affordable housing and homelessness.  “You’d be surprised how many people are just kind of on that tipping point, where all it takes is one small, unexpected emergency to tip them over the edge where they’re at risk of losing their home.”  Observed Scott Morishige, Executive Director of PHOCUSED.

Over the past two legislative sessions, coalitions have formed around specific substantive issues, such as the increase in minimum wage and increases in funding for affordable housing and homeless efforts.  Success for these coalitions has been tied to a diverse, broad-based membership working together to support common interests and priorities.  In September 2014, PHOCUSED, Hawaii Appleseed and Catholic Charities Hawaii convened an Advocacy Conference as a step to better aligning diverse coalitions across Hawaii. This was followed with a Social Advocacy Forum in January 2015.

In March 2015, PHOCUSED held a Social Advocacy Day to strengthen the existing informal network of advocacy coalitions by providing opportunities for coalition members to meet with legislators and share their voices at the State Capitol. Partners in Care, Waikiki Health, Pacific Alliance to Stop Slavery, Hawaii Primary Care Association, Community Health Outreach Work to Prevent HIV/AIDS, Child & Family Services, Hawaiian Community Assets, COFA CAN, and and others raised awareness about the need for affordable housing and funding for homeless services.