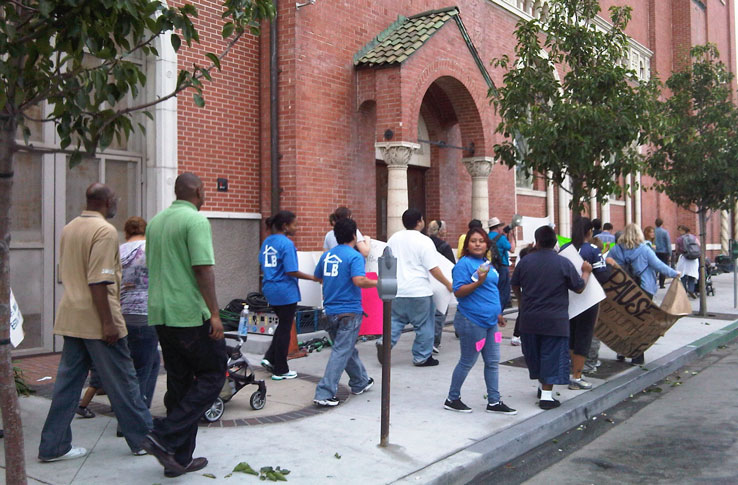 Housing Long Beach was victorious creating a housing trust fund in Long Beach in 2006, after more than three years campaigning against a reluctant City Council. While initial funding was committed to the Housing Trust Fund, City Council has failed to embrace numerous potential revenue sources advanced by the community.

Now the City is creating a proposed Downtown Redevelopment Plan (and an accompanying Environmental Impact Report) that could potentially provide for a number of community beneﬁts, including funding for affordable housing. After an intensive campaign, Housing Long Beach has won a pause in the process to enable consideration of an economic study which could provide valuable information to the City’s deliberations.

Legal Aid Foundation of Los Angeles has been working closely with Housing Long Beach in this process. Housing Long Beach is a grassroots organization which has been working for years to get Long Beach to address inequities and needs important to the residents of the community. Legal Aid Foundation of Los Angeles (LAFLA) secured $100,000 in funding from the California Endowment so that an economic consultant (hired previously by the City) could complete the study.

When the City balked at granting the time for completion of the study necessary for it to be considered in the Downtown Plan, LAFLA and Housing Long Beach swung into high gear, holding a series of community meetings, speaking at numerous council meetings and working with the media, to shed light on the City’s actions. Proponents of the Plan who opposed the request for a pause alleged that a four-month delay would have serious consequences and labeled low income community members as “special interests” in the process.

The third and ﬁnal City Council meeting regarding the request to pause the release of the Plan took place on November 9, 2010. The City Council Chambers was packed with housing advocates, low-income tenants, seniors and disabled individuals who supported allowing the economic study. A line of people waiting to make public comments stretched the length of the chamber staircase.

Cinde Soto, a HLB leader, was particularly inspiring as she lowered the podium and spoke from her wheel chair about the need to take into account the interests of disabled and low-income residents in the downtown area.

Those speaking in favor of the pause were effective, as one by one they identiﬁed themselves as “special interests,” a label that contrasted sharply with their real life situations. The City Council voted unanimously to release the Plan and the Environmental Impact Report (EIR), but extended the EIR comment period from the usual 30 days to 115 days to allow the economic study to be included in the public comment period.

Housing Long Beach will have little time to savor their victory. As Susanne Browne of the Legal Aid Foundation of Los Angeles said, “Winning time for the economic beneﬁts study became a campaign within a campaign, but the real ﬁght for community beneﬁts lies ahead.”The Plan could result in displacement of up to 25,000 low income residents to make way for massive new development in a 630 acre area. Currently, the Plan includes no community beneﬁts, such as affordable housing or local hiring. Housing Long Beach has asked for consideration of several potential community beneﬁts, including:

The Downtown Redevelopment Plan has a potential to include a stream of dedicated revenue to support the Housing Trust Fund and provide real housing opportunities for low income residents of Long Beach—a goal the City has struggled to meet. In the City’s own Housing Element Report, it concludes that it is far behind in meeting its affordable housing production needs. “It’s a real shame the city doesn’t want to partner with the community in what should be a community-driven process,” Browne said.

The economic study will include a residual land value analysis, to examine increased land values to developers as a result of the massive economic beneﬁts and incentives in the Plan, such as increased density, fast-tracked development and waiving environmental requirements.

Quantifying the beneﬁts to developers in the study will enable stakeholders to have a real-world data-based discussion about the possibility of including community beneﬁts in the Plan. This would allow for balanced and accountable development, which takes into account the needs of Long Beach residents.

NEXT Massachusetts Housing Advocates Save State Law 40B