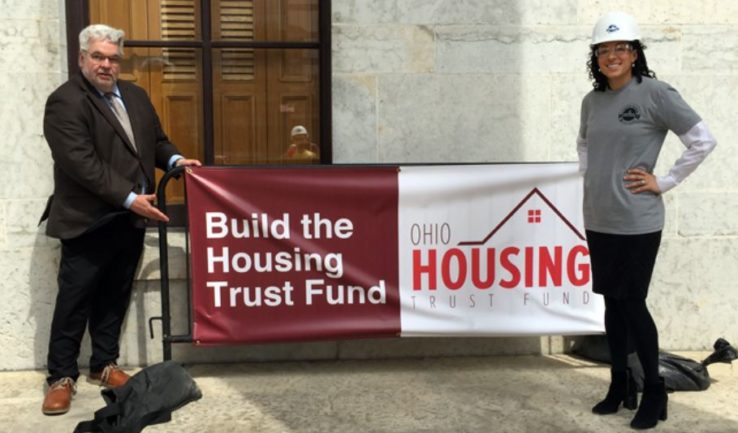 Arizona lawmakers approved one of the largest budget increases for housing and homelessness in nearly a decade, allocating a one-time investment of $15 million for the State Housing Trust Fund in the state’s 2020 budget.  The Arizona legislature established the Housing Trust Fund in 1988 to provide a flexible funding source to assist in meeting the housing needs of low-income families in Arizona. At its peak in 2007, the Fund received $40 million annually, providing housing relief for more than 12,000 households. The $40 million came from a dedicated revenue source, 35% of the proceeds from the State’s Unclaimed Property Fund. In the years that followed, the state legislature diverted the vast majority of the revenue from the Unclaimed Property to address other shortfalls in the state budget.

Arizona Housing Coalition and their allies celebrated the funding increase, while also calling for a return to fully funding the Housing Trust Fund.  Arizona Housing Coalition Chief Executive Officer Joan Serviss: “While we have a long way to go before restoring aid for housing to what it was, this year’s budget is a good sign that Gov. Ducey and the state legislature are beginning to see that ending homelessness and increasing access to affordable housing are a primary concern for Arizona residents.”

The Pennsylvania legislature approved state spending bill that increases funding for the state housing trust fund increasing the cap on the portion of the state Realty Transfer Tax (RTT) dedicated to the housing trust fund.  The legislature increased the cap on the PHARE portion of the RTT revenue from $25 million annually, up to $40 million annually.

After a multi-year advocacy effort led by the Housing Alliance of Pennsylvania, the legislature established the Pennsylvania Housing Trust Fund in 2010 with the passage of the Pennsylvania Housing Affordability and Rehabilitation Enhancement (PHARE). Under PHARE, the state housing trust fund can be used for redevelopment, construction, rental assistance, foreclosure prevention, homeownership counseling, and special needs housing. PHARE requires that 30% of the funds benefit households below 50% area median income, and establishes a preference for green building standards. PHARE requires that the Pennsylvania Housing Finance Agency develop a proposed annual plan based on local needs and provide regular reporting on the use of the funds.

PHARE receives funding from three sources: a portion of the RTT, a portion of Marcellus Shale Impact Fees, and the national Housing Trust Fund. Funds generated from the RTT can be used statewide.  Marcellus Shale Impact Fee funding must be used in counties impacted by energy extraction. Leading the advocacy effort once again was the Housing Alliance, mobilizing its membership to secure legislative support to raise the RTT cap.

The number of people experiencing homelessness in Ohio has increased 20 percent over five years, with more than 71,000 Ohioans impacted. Responding to the soaring need, COHHIO (Coalition on Homelessness and Housing In Ohio) put pressure on the legislature to increase funding for the Housing Trust Fund. COHHIO organized more than 300 member organizations and allies throughout the state to push the legislature to raise the state document recording fee.  COHHIO worked with local partners to show legislators successful projects in their districts and introduce them to real constituents who benefit from the Housing Trust Fund. The group’s focus on housing as key to addressing other public policy issues resonated as policymakers worked to improve healthcare, education, and the economy. COHHIO’s advocacy succeeded, as the legislature increased the document recording fee by $6 for most documents to generate the additional funding for affordable housing and homeless services.

The Housing Trust Fund is a flexible funding source utilized for the development, preservation, rehabilitation, and operation of affordable housing, as well as the state’s primary tool for addressing homelessness. Ohio Housing Trust Fund funds distinct programs in three areas: Affordable housing development and preservation, homeless services, and home repair and modifications for people with disabilities and seniors. The primary source of funding for the Housing Trust Fund is document recording fees collected by county governments. The revenue collected from the recording fees has decreased from $73 million in 2005 to $43 million in 2020, the same time period that the number of people experiencing homelessness in the state has increased.