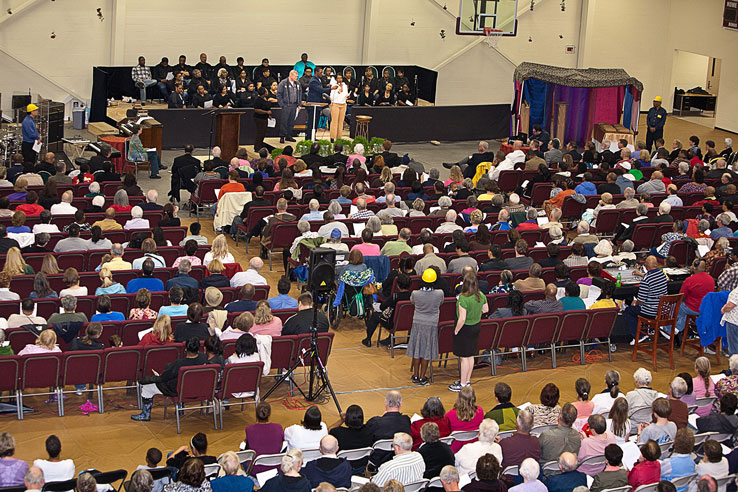 On March 17, 2011, the Lexington/ Fayette County Council listened to a presentation by Commonwealth Economics on the ﬁscal, economic, and social impact of an Affordable Housing Trust Fund in Lexington, Kentucky. Eighty-one members of BUILD, members of the Central Kentucky Housing and Homeless Initiative, and others were present—all of whom have been advocating for the Fund since 2008.

BUILD (Building a United Interfaith Lexington through Direct Action) is a local faith-based organization part of the DART Network. The Central Kentucky Housing and Homeless Initiative mobilizes the nonproﬁt, public, faith-based and private sectors in an effort to end homelessness and ameliorate housing insecurity.

The study was contracted to provide the Lexington-Fayette Urban County Government with a complete view of the anticipated economic, ﬁscal, and social impacts that an Affordable Housing Trust Fund would have throughout Lexington. The study concluded that with $4 million in annual revenues (and accounting for leveraging) the Fund could support an average of 470 housing opportunities each year, including 150 new construction projects and 320 rehabilitation projects.

More than 363 new jobs would be directly and indirectly supported by this investment. And Lexington would beneﬁt from more than $43.3 million of direct, indirect and induced economic activity from the development supported through the Trust Fund. The report also cited numerous studies that show improvements in health, family stability, education, and the environment as anticipated community beneﬁts.

At the Council meeting, eight citizens testiﬁed on the need for an Affordable Housing Trust Fund in Lexington. Mayor Jim Gray was asked to honor his pre-election promises. Two Council-members spoke in favor of the Trust Fund: Councilmember Chris Ford and Councilmember Diane Lawless. At the March 17 council meeting, the Council agreed to send the Affordable Housing Trust Fund to the Economic and Community Development Committee for further analysis and consideration.

Firmly committed to the fund, BUILD asked the Mayor and all Urban County Council members to attend the organization’s annual Nehemiah Action on April 11, 2011. BUILD’s large assembly, the Nehemiah Action, is where BUILD holds public ofﬁcials accountable for justice in Lexington.

More than one thousand people attended BUILD’s Nehemiah Action. An intentional custom of Nehemiah Actions is to ask elected ofﬁcials for their commitment to selected issues championed by BUILD. When Mayor Gray was asked about his support for the Affordable Housing Trust Fund his initial response indicated a willingness to invest $100,000 in a feasibility study for the trust fund. BUILD leaders are frustrated with the “not now” theme they’ve heard for years. Another possibility is that these funds would be used as seed money to demonstrate a rehabilitation program. Three council members indicated their support for the housing trust fund and taking steps by October of 2011.

Of the rental households in Fayette County, some 45% currently pay more than one-third of their gross household income for rent. This means that these households are not affordably housed. Worse yet, 18% of renter households pay more than half of their income for housing, leaving these neighbors in danger of becoming homeless, according to the Central Kentucky Housing and Homeless Initiative. Evidence shows that the cost of rental housing has been increasing faster than wages for decades in Lexington and that this trend has continued.

mpaign, sponsored by the Central Kentucky Housing and Homeless Initiative has a ﬁve member Steering Committee and meets monthly to advance the Affordable Housing Trust Fund.

The Commission further delineated that the Fund would be administered by an independent Governing Board, appointed by the Mayor and approved by Council. A Technical Assistance Advisory Group would also be established to provide assistance.

The Commission recommended funding the Affordable Housing Trust Fund by adding 1% to the existing insurance premium tax in Fayette County. This revenue source would generate approximately $4 million in annual revenues for the Fund.

In the economic beneﬁt study, Commonwealth Economics analyzed three rates: a .5% increase, a .75% increase, and a 1% increase (each excluding health insurance). The insurance premium tax would apply to homeowner insurance and automobile insurance. The study estimates that the impact per household would be between $15 and $35 annually, depending on the rate of increase in the local insurance tax.