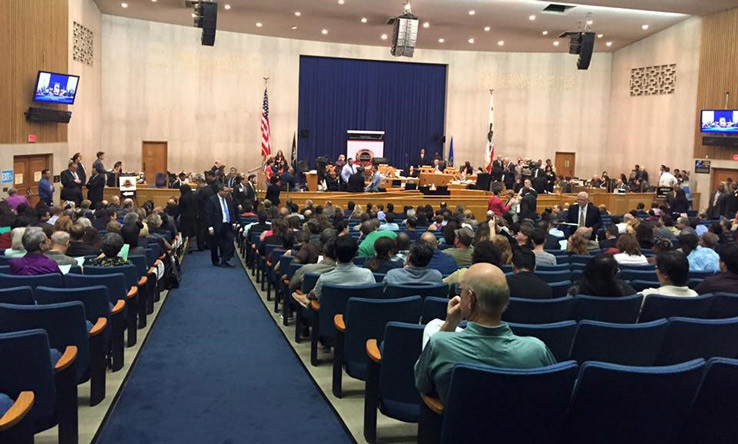 The Los Angeles County Board of Supervisors agreed on an historical commitment of new funding to invest in affordable homes on an ongoing basis.  The County Board voted unanimously to commit $300 million for affordable homes over the next five years, with a dedicated $100 million per year thereafter. The plan creates an Affordable Housing Programs fund, beginning with $20 million in FY 2016-17 and scaling up to $100 million annually by FY 2020-21.  This is the largest allocation of funding for affordable housing in the region since the City of Los Angeles committed $100 million to its Housing Trust Fund more than a decade ago.

Housing advocates throughout the County are celebrating this victory.  The Southern California Association of Nonprofit Housing (SCANPH) partnered with other advocacy groups, including LA Voice (the local PICO National Network member organization) mobilizing residents to support the new housing plan.  Close to 80 advocates participated and many spoke in favor of the housing plan  at the County Board of Supervisors’ meeting earlier in the year in October.  A minimum of 75% of the funds will be dedicated for the production and preservation of affordable homes for very- low and extremely low-income households.

The County’s commitment to funding affordable homes is a response to both the growing numbers of people facing homelessness throughout the County and the dissolution of the redevelopment agencies (RDAs) in January 2012, which eliminated nearly $275 million per year in funding for affordable housing.  SCANPH’s successful strategy built up after a coalition of SCANPH members, faith leaders, and other housing and community organizations collaborated in turning out more than 500 people to candidate forums for a hotly contested County District.  During one forum, then candidate, now County Supervisor Sheila Kuehl pledged to dedicate a majority of the nearly $150 million a year the County currently receives from the former redevelopment agencies.

SCANPH’s strategy continued in 2015 with the coalition meeting with Supervisors and sending more than 300 letters and nearly 2,000 postcards from residents supporting the dedication of County funds for affordable homes.  Many residents from the Residents United Network Los Angeles helped to distribute and sign the postcards. Ten months later, Supervisors Kuehl and Mark Ridley-Thomas co-sponsored the October motion to increase the amount of funding the County allocates for affordable housing until it reaches an ongoing, annual allocation of $100 million. Showing enormous leadership, all five County Supervisors voted in favor of the motion.

Alan Greenlee, executive director of SCANPH, pointed to a recent study that found Los Angeles County needs more than 527,700 additional affordable rental homes to meet the needs of families at the bottom of the income scale. He voiced support for the proposal by Kuehl and Ridley-Thomas.  “It’s just a more aggressive, more ambitious proposal that will bring sorely needed financial resources for development of affordable housing,” Greenlee said.