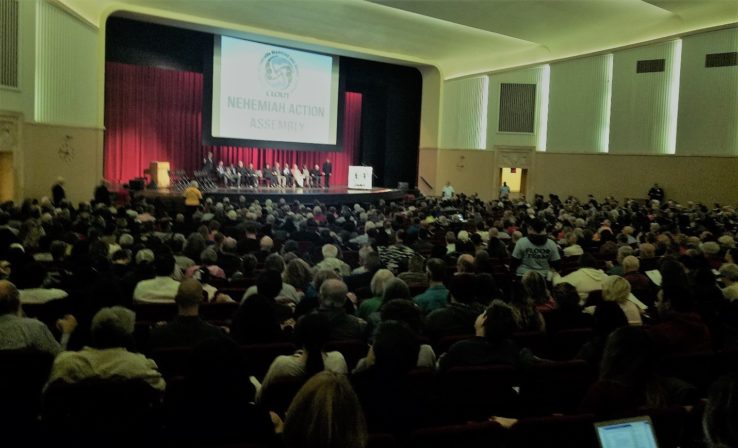 On June 26th, the Louisville Metro Council approved the city’s operating and capital budgets for the next fiscal year that included $10 million allocation for the Louisville Affordable Housing Trust Fund (LAHTF).  Specifically, the capital projects budget, including $10 million in bonding for the LAHTF — to be sold late in the fiscal year or early in the next fiscal year — passed by a 20 to 4 vote. This makes the second consecutive year that Metro Council has funded the LAHTF at the $10 million level, the level at which the LAHTF was intended to receive when it was established in 2009.

Housing activist worked throughout the year to continue to educate Metro Council and the Mayor to support the LAHTF.  One way to garner more support for a housing trust fund is to show its effectiveness.   Christie McCravy, Executive Director of the Affordable Housing Trust Fund, wrote in the LAHTF 2017 report, “Fiscal Year 2017 has been an exciting year…the LAHTF made an impact on 338 families with its development funds and special project funds.  Additionally, another 400 individuals/ households (were) served with our Supportive Housing Grant awards!… The $2.5 million general fund allocation, as well as the remaining $600,000 from the previously allocated HOME funds, helped to leverage more than $35 million into this community. Again, Housing Trust Funds work!”    The $2.5 million allocated in FY2017 referenced by Ms. McCravy was the first funding with city dollars into the LAHTF since a small infusion in 2012.  In Fiscal Year 2018, The Metro Council and the Mayor further committed a nearly $10 million allocation.  Funded projects from FY2018 funds were announce earlier this year.

Keeping up the pressure, in April 2018, Citizens of Louisville Organized and United Together (CLOUT) turned out 1,000 people at an action where they secured commitment from seven of Metro Council members to support the $10 million allocation if it was in the Mayor’s budget for Fiscal Year 2019.  Trish Ramey, CLOUT Affordable Housing Issue Committee Chair urged Council, “Wages for low and moderate income folks have fallen so far behind housing costs that many Louisvillians are now forced to spend nearly half their income on rent-far over the 30% deemed reasonable. The other alternative is to live in substandard housing that then eats up their income in exorbitant heating costs. Metro Council has to make funding for more affordable housing part of their structural expenses rather than a budget item. There are solutions if they have the political will.”

In addition, CLOUT secured commitments from Council members to meet about next + Add New Issue steps following a study commission by the LAHTF to identifying dedicated revenue for the fund.   After this event,

Mayor Greg Fischer, for the first time, sent the capital budget to the Louisville Metro Council with a $10 million allocation to the LAHTF.  In a May 24th Opinion editorial in the Louisville Courier, Mayor Fischer wrote: “The recent investments made by my administration, together with the Metro Council, are significant, but we know we must continue to invest.  Our city will truly be prosperous only when all of our citizens have the opportunity to sleep safely in their own beds in a stable home every night. “

The budget allocation represents a significant win for Louisville housing advocates, who have been pushing Metro Council for a nearly decade to fulfill the commitment of $10 million annually since it established the LAHTF by ordinance.

The LAHTF is designed to be flexible and respond to evolving community needs through grants and loans for a range of affordable housing-related activities. All projects are underwritten and reviewed by a Program Committee made up of local lenders, housing finance representatives, developers and staff and ultimately approved by the Board of Directors. Eligible activities are new development, acquisition, preservation and rehabilitation of affordable homes and apartments for renters and owners; energy efficiency improvements for existing housing; homeownership counseling and down payment assistance; and foreclosure prevention. Eligible applicants for LAHTF funds are for-profit and not-for-profit developers and qualified housing organizations.

Going forward, CLOUT and fellow advocates will maintain their focus: a dedicated source of revenue that will provide $10 million annually.  Metro Council and LAHTF plan to identify potential sources of revenue over the next fiscal year.

To learn more about the Louisville Affordable Housing Trust Fund, go to here or contact Christie McCravy at christie@louisvilleahtf.org