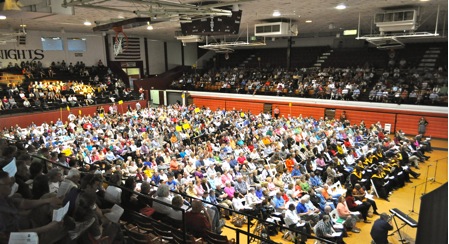 “Mayor Fischer has recognized the signiﬁcance and usefulness of a local Affordable Housing Trust Fund in both providing housing and in creating jobs. He highlighted this ﬁrst allocation under his administration as solidifying his commitment,” acknowledges Cathy Hinko, Executive Director of the Metropolitan Housing Coalition.

Long time champions of the housing trust fund, CLOUT (Citizens of Louisville Organized and United Together) and the Metropolitan Housing Coalition, have been working with the Mayor and the City Council to make the case for a dedicated revenue source for the Affordable Housing Trust Fund.

In April 2011, CLOUT invited the Mayor to its Nehemiah Action Assembly, attended by more than 1,560 members. Among several issues for which CLOUT requested support from elected ofﬁcials, CLOUT asked Mayor Greg Fischer to make ﬁve commitments related to the Affordable Housing Trust Fund:

The Mayor pledged to prioritize securing the dedicated, ongoing revenue source, agreed to the strategy meeting within 30 days, and said he would return to CLOUT in October. The Mayor said he could not allocate $500,000 in the FY2011-12 budget, but he was committed in principle to committing local revenue to the Affordable Housing Trust Fund until a dedicated, ongoing source is secured. The Mayor did pledge $100,000 for FY2011-12 budget.

Following the meeting, Mayor Fischer has followed through on his commitments. In addition to the $100,000 general fund budget allocation, in late June, the Mayor sat down with leaders from CLOUT and members of the Louisville Affordable Housing Trust Fund Board to discuss viable sources for dedicated revenue, with a pledge to continue working with the Board to secure a revenue source.

Though the $100,000 the Mayor allocated in the FY2011-12 budget is a good start, the Mayor is requiring that the Board secure a matching $100,000 from other
public, private or philanthropic sources before releasing the funds. The Board has already begun to identify some potential resources for the match, with the help of the Mayor’s ofﬁce. But advocates recognize that even when the match is secured, the growing need for affordable housing in Louisville requires greater resources.

“There is an urgency to take action here. We have families and single women sleeping in tents down by the river,” said David Dutschke, Co-President of CLOUT. “When we started this campaign in 2005, the Housing Authority of Louisville had a waitlist of 11,000. Here we are six years later, and the waitlist has more than doubled to 25,000, which is both staggering and shameful when you think of the human impact and what could have been done over those years.”

In addition to the increasing numbers of people experiencing homelessness, the lack of affordable housing in Louisville also limits where people are able to live, often resulting in families living in substandard and unsafe housing. In January 2011, the Metropolitan Housing Coalition released “The State of Fair Housing in Louisville: Impediments and Improvements.” The report outlines patterns of housing segregation based on race, gender, familial status, disability and national origin. The report also examines the link between health outcomes, incomes, protected class status, and where people are living. The report concludes with a series of recommendations for increasing housing opportunity, including funding the Affordable Housing Trust Fund through a dedicated, renewable public source.

With simultaneous short-term and long-term revenue campaigns to manage, members of the Board and its allies are looking to reinvigorate the Open the Door Campaign, the effort focused on creating the Affordable Housing Trust Fund several years ago. The Open Door Campaign involved several organizations, including: the Coalition for the Homeless, the Metropolitan Housing Coalition, CLOUT, Habitat for Humanity of Metro Louisville, Kentuckians for the Commonwealth, Kentucky Jobs With Justice, Women in Transition, the Kentucky Alliance Against Racist and Political Repression, among others.

The Open the Door Campaign demonstrated signiﬁcant community support with more than 80 organizational and 2,000 individual endorsements of the Affordable Housing Trust Fund, as well as supporting two rallies and sending more than 1,500 postcards to the Mayor and Metro Council.

Now, working with the commitment of Mayor Fischer, the Open the Door Campaign can 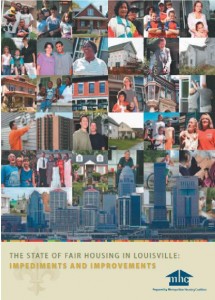 secure its original vision of a dedicated public revenue for the Louisville Affordable Housing Trust Fund.

“The Affordable Housing Trust Fund we have in place is a tremendous tool developed
out of best practices from around the country that could help people in Louisville ﬁnd a place to live,”
said Dutschke. “But until we put signiﬁcant revenue in the fund, it is a tool sitting on the shelf. The time to prioritize funding for housing and secure an ongoing revenue source is now.”

To download a copy of “The State of Fair Housing in Louisville: Impediments and Improvements,” click here.

NEXT Juneau Begins Implementation of its Affordable Housing Trust Fund