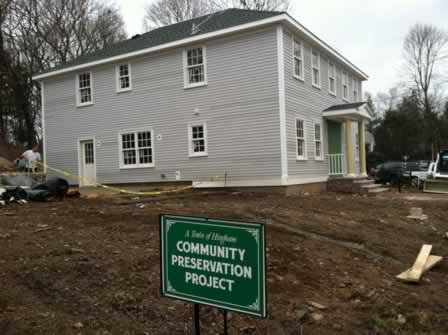 Massachusetts housing advocates celebrated two wins in the 2014 legislative session: For the second consecutive year, the legislature passed and the Governor signed a budget that included $25 million earmarked for the Community Preservation Act’s Trust Fund, as well as legislation that allocates $3 million to funding the Housing Preservation and Stabilization Trust Fund.

The Community Preservation Act (CPA) helps communities preserve open space and historic sites, create affordable housing, and develop outdoor recreational facilities by allowing them to create dedicated local Community Preservation Funds for these purposes.  Community preservation monies are raised locally through a voter approved surcharge of not more than 3% of the tax levy against real property, and municipalities must adopt CPA by ballot referendum. Each participating community also receives an annual match, at varying percentage levels, to its locally raised CPA revenues from a statewide Community Preservation Trust Fund created by the Act. Currently, 158 Massachusetts communities have adopted the CPA, an impressive 45% of the Commonwealth’s cities and towns. Each CPA community creates a local Community Preservation Committee (CPC) upon adoption of the Act, and this five-to-nine member board makes recommendations on CPA projects to the community’s legislative body.

A robust advocacy effort late in the legislative session from CPA advocates to members of the legislative committee charged with reconciling the differences between the House and Senate versions of the FY15 budget helped secure the $25 million from the state’s FY2014 budget surplus for the Community Preservation Act Trust Fund. The CPA Trust Fund, established by statute as part of the CPA and administered by the Massachusetts’ Department of Revenue, provides additional funding each year to communities as an incentive for communities to pass CPA. Unfortunately, state budget constraints over the summer led to a smaller state budget surplus than anticipated, which reduced the funds available for transfer to the CPA program to $11.4 million.

Since its establishment in 2000, the CPA has raised $1.4 billion for community preservation activities statewide, which has contributed to more than 7,500 CPA projects, including the creation or preservation of more than 8,500 affordable homes and apartments. In addition, CPA funds have helped preserve 21,800 acres of open space and have funded 1,250 outdoor recreation projects.

The funding comes at a critical time for the CPA program, with revenues to the statewide Community Preservation Trust Fund down dramatically in 2014, almost 30% less than from the same period in 2013, a reduction of $5.3 million. The statewide Community Preservation Trust Fund receives dedicated revenue from recording fees charged at the state’s registries of deeds. With the housing market still struggling, these fee collections have been down in recent years.

The Housing Preservation and Stabilization Trust Fund (HPSTF) received $3 million as part of a larger economic development initiative enacted by the legislature and Governor.  The HPSTF is intended to provide the Massachusetts Department of Housing and Community Development (DHCD) greater flexibility to fund new initiatives, create affordable housing, and provide resources to respond to urgent needs. The legislature established the HPSTF in 2013 through the FY 2014 budget.  DHCD invested the initial FY 2014 allocation of $10 million in the creation of supportive housing units, to supplement HomeBASE household assistance-a homeless prevention program, and to provide funding for the Secure Jobs Initiative-which fosters partnerships between homeless services, workforce development and child care agencies. In addition to the $3 million allocated for the HPSTF, the economic development initiative provides $10 million for the Brownfields Redevelopment Fund, doubles the Housing Development Incentive Program to $10 million, and creates the Gateway Cities Transformative Development Fund with an initial capitalization of $16 million. Click here to learn more.