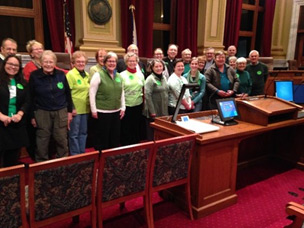 A well-organized coalition of advocates for affordable housing won $10.5 million for the Minneapolis Affordable Housing Trust Fund in the 2015 budget. The Trust Fund was established in 2002 by the City Council and Mayor to create and preserve affordable rental housing. The program provides gap funding for development and the City established an annual goal of $10 million for funding the program.  This is only the third time the fund has hit its stated goal. While advocates representing the $20 Million for Affordable Homes campaign pushed for a higher goal, the $10.5M that was ultimately awarded is a significant win.

Twin Cities Habitat for Humanity, the Alliance for Metropolitan Stability, the Metropolitan Consortium of Community Developers, City of Lakes Community Land Trust, Downtown Congregations to End Homelessness, and Beacon Interfaith Housing Collaborative were active in pushing elected officials to make this goal breaking decision in the budget for 2015. Working in collaboration with more than 20 organizations to support the entire continuum of housing—from the affordable housing trust fund to ownership housing—was a critical element of the campaign. 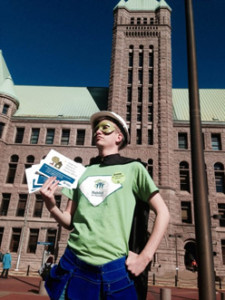 Susan Haigh, President and CEO of Twin Cities Habitat for Humanity reflects on the success of the campaign:  “Even though Twin Cities Habitat for Humanity’s programs focus on homeownership and not rental, we were thrilled to be part of the coalition that got these funds set aside. This investment by the City of Minneapolis means more families and individuals will have a safe, stable, and affordable place to call home in the future. It was a big win for our Housing Heroes, the green-shirted advocates who bring our mission to life whenever progress can be made on eliminating poverty housing in the Twin Cities.”

Mayor Betsy Hodges released her budget below the $10 million goal set by the Council.  After the Council evaluated and approved the budget, funds were found to reach an allocation of $10.5 million for the Affordable Housing Trust Fund.  Advocates turned out in large numbers at the Council budget hearing—eighteen advocates spoke in favor of reaching the campaigns $20 million goal for the AHTFund. Much of the boost in funding came from an account fueled primarily by development loan repayments and land sales.  Federal funds have also been used by the trust fund.

“I think it demonstrates what can be accomplished for the greater good, when people come together with one voice.  We want to thank the council and the Mayor for recognizing the importance of the city supporting a range of housing options for its citizens,” said Jim Roth, Executive Director of the Metropolitan Consortium of Community Developers, the association of nonprofit developers.

The City’s Affordable Housing Policy requires that when the Affordable Housing Trust Fund assists housing developments of ten or more homes, at least 20% must be affordable to households earning no more than 50% of the area median income. The AHTFund Advisory Committee (members chosen by the Mayor and City Council) formulate selection criteria used to score and rank proposals.

Experience has shown that for every dollar invested in affordable housing by the Affordable Housing Trust Fund, the city attracts $9 of additional funding through debt, equity and other funders.

Since inception, the Affordable Housing Trust Fund has committed $73 million to affordable homes. The total cost of these developments reaches approximately $850 million.  The City has carefully identified the benefits from investing in affordable housing beyond providing decent, safe and affordable homes to all residents of Minneapolis.  These include: