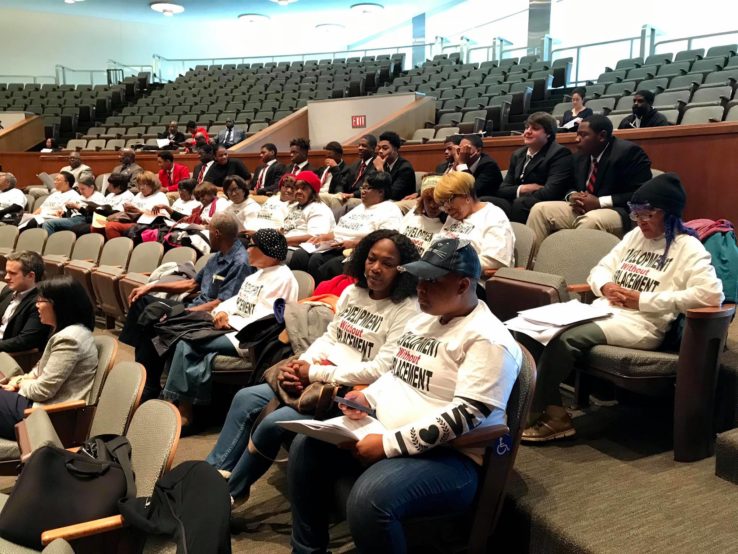 In June, the Housing Trust Fund Coalition from Detroit, Michigan won a $2 million investment from the general fund into affordable homes after a multi-year campaign to get the city to address the longstanding housing crisis. This is in addition to $2 million generated this year from the sale of city owned property, the dedicated revenue source committed to the Affordable Housing Development and Preservation Fund in the 2017 ordinance that established the fund. The $4 million housing trust fund allocation marks an important victory for Detroit. Detroit has the unfortunate reputation as the city most emblematic of the death of American manufacturing and the subsequent disinvestment from majority African American communities. Unsurprisingly, Detroit is now one of the epicenters for mass displacement and gentrification. Rents are among the fastest rising in the country, and longtime residents are struggling to stay in the communities their families have lived in for generations. Currently, 230,000 people live below the poverty line in Detroit. Without these critical investments, an enormous number of people, the majority of whom are African American, will be displaced from Detroit.

Detroit People’s Platform, Detroit Disability Power, Community Development Advocates for Detroit, Coalition of Temporary Shelters Detroit, and other organizations led the coalition. The coalition is black-led and multi-racial.  The coalition employed a number of grassroots organizing and lobbying strategies. For example, they organized a town hall where community members, stakeholders, and city council members attended to learn about the extent of the problem, why affordable housing is one of the key solutions, and some strategies from successful campaigns in other cities. Other strategies included testifying at city hall, organizing phone banks, writing editorials for local newspapers, and lobbying city council members. The coalition also organized outreach days, trainings, community meetings, and other events to mobilize, engage, and develop the leadership of community members. The guiding principal of the campaign was that the people most impacted by the housing crisis need to be engaged at every step of the process and put into leadership positions

The coalition is now calling on the Detroit City Council to dramatically increase annual revenue to at least $20 million per year by dedicating other revenue sources in addition to the sale of city owned property. Moreover, they are urging the City Council to ensure that these funds go to where the need is the greatest by funding housing for people at 50% area median income and below, $35,000 in annual income for a family of four in Detroit. Still, the coalition made several major steps forward through a persistent, grassroots campaign that engaged a wide array of organizations and lifted up the leadership of the community members most impacted by the housing crisis.