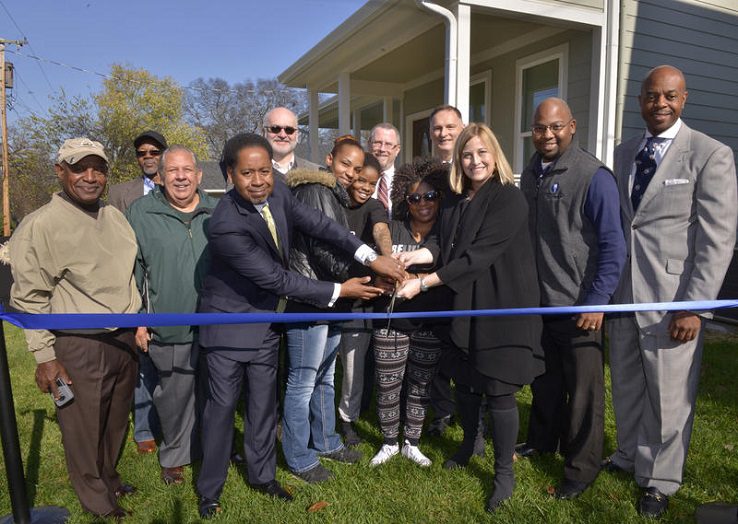 Nashville, Tennessee’s Mayor Megan Barry advances a Housing Priorities and Action Plan by approving an additional $10 million for the Barnes Housing Trust Fund.  This is the largest infusion of resources since the Fund was created in 2013.

The new funds will combine with $5 million the fund is to receive from the sale and planned redevelopment of the old Nashville Convention Center and $1 million from other sources. The Fund has invested in excess of $4 million to support affordable housing, using Barnes Fund investments and leveraging with federal and private funding sources, to provide more than 100 affordable homes to Nashvillians. A new request for proposals is anticipated in September 2016.

Advocates, including A VOICE, NOAH and nonprofit developers appreciate these resources but are still calling for a dedicated source of ongoing public funds to support the Barnes Fund.  “It’s a significant commitment from the city,” said Avi Poster, who leads the anti-poverty groups A VOICE.  “Obviously, I would prefer to see it coming out of a recurring stream so that we’re assured that in up-and-down years that this same amount would be going into the fund.  I’m encouraged by the overall message and acknowledgment that housing is something that we have to address immediately,” as reported by the Tennessean.

The Fund provides funding for renovation or construction of affordable homeownership and rental opportunities and other supportive efforts to encourage affordability for households earning no more than 80% of the area median income.

The funding is integral to achieving the objectives outlined in the Mayor’s Housing Priorities and Action Plan for 2016-2017.  The initiative includes Metro Council’s approval of donating thirteen Metro properties to nonprofits who agree to build affordable housing on the land.  The Mayor’s Office says there are nearly 60 Metro-owned properties that could be used for affordable housing in the future under this initiative.  The Mayor’s Office intends to use the framework of four priorities:  fund, build, preserve, and retain affordable and workforce housing options for setting housing policy in the future.  The four guiding principles are outlined in the report:

The priorities are graphically highlighted here and spelled out in more detail in the report: 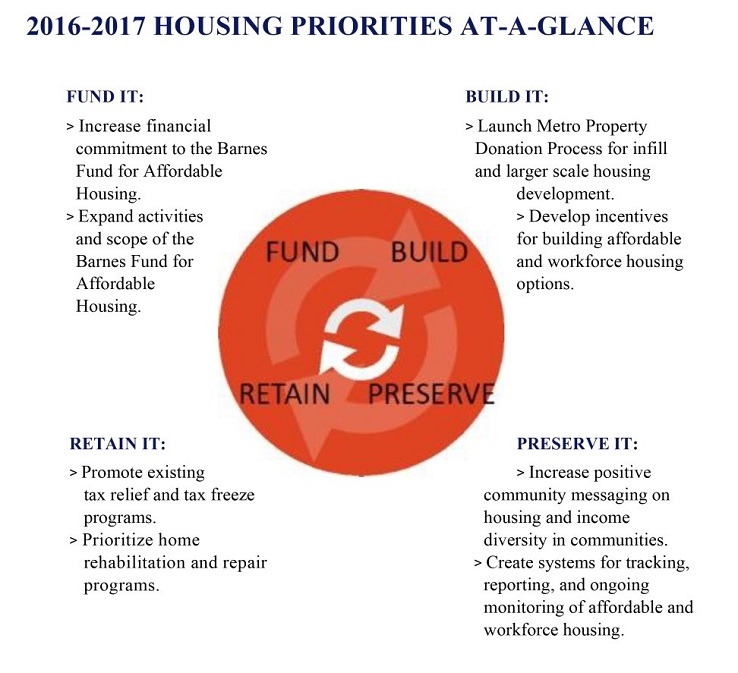 An Affordable Housing Incentive Program was also announced, subject to Metro Council approval, that would further encourage developers to undertake development to provide affordable and workforce housing by offering funds to cover the difference between the price of market-rate housing and the price of making the homes affordable.  Funds would be capped at an amount equal to half of the increased property taxes the property would generate for Nashville once fully developed.  The pilot program would also provide options for owner-occupied housing and existing rental properties to prevent displacement of current residents.  This program would be launched with a 24-month sunset provision and a fiscal year 2017-2018 cap of $2 million in order to measure and evaluate its impact.