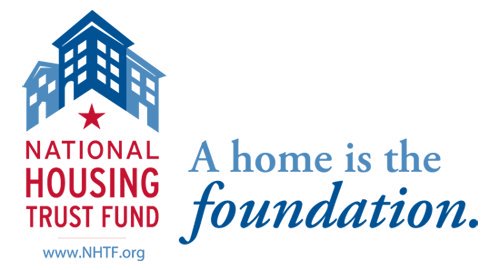 The establishment of the National Housing Trust Fund (NHTF) has been a long fought for policy that soon will be fulfilled later this summer; the first round of funding is set to be released later this summer.  While this first round is modest, it is a positive shift after decades of no new federal investment in affordable housing for extremely low income families and individuals.

Advocates for affordable homes are working quickly to influence their state plans for NHTF implementation.  The National Low-Income Housing Coalition (NLIHC) has been supporting partners in the field with in-depth information on the NHTF from the interim regulations to templates for state plans to doggedly following the details for each state’s plans and hearings.  NLIHC is working to make sure that the implementation of the NHTF happens with best practices and the least obstacles to make the most impact.  To get more detailed information from NLIHC on the NHTF implementation please click here.

NLIHC learned that the Democratic Party Platform includes a housing plank that would commit to substantially increase funding for the national Housing Trust Fund to construct, preserve, and rehabilitate millions of affordable housing rental units. The Platform notes that such an expansion would “not only help address the affordable housing crisis, it will also create millions of good paying jobs in the process.”  This is a positive sign in that neither major party candidate for President has talked about affordable housing even though a majority of voters according to recent polls are very concerned about housing affordability no matter their party affiliation.

Need to Be Vigilant:

While the NHFT rolls out now, advocates for affordable homes must remain vigilant that the fund isn’t stripped of its dedicated funding source.  The NLIHC reported in a recent memo to members that Representative Mike Capuano (D-MA) and 31 other Democrats sent a letter to Treasury Secretary Jack Lew and Federal Housing Finance Agency (FHFA) Director Mel Watt urging them to reassess the Obama Administration’s policy that prevents Fannie Mae and Freddie Mac, known as government sponsored enterprises (GSEs), from building up their capital reserves, which are expected to run out by 2018. Specifically, the lawmakers are concerned that the GSEs lack of adequate capital buffers could put funding for the national Housing Trust Fund (HTF) and the Capital Magnet Fund (CMF) at risk.

Mr. Watt had previously stated that if Fannie Mae or Freddie Mac have to make another draw from Treasury, their obligation to fund the HTF and CMF could be suspended again.

The June 2 letter states, “[T]he investments [the GSEs] are authorized to make, most notably to the National Housing Trust Fund and Capital Magnet Fund, could be suspended under your policy that suspension occurs in the event that either GSE is forced to make a draw or it appears as though an investment would cause a draw. The GSEs are finally contributing to these important funding vehicles, including for extremely low income families, eight years after they were first authorized in the [Housing and Economic Recovery Act of 2008 (HERA)]. We sincerely hope that they will not once again be put on hold as a result of capital concerns that your agencies have the power to correct.”

The lawmakers point out that HERA requires Mr. Watt to ensure the companies are adequately capitalized, which is jeopardized by the agreement between FHFA and the Treasury Department to sweep all of the GSEs’ profits into the Treasury rather than being put towards their capital reserves.

The National Housing Trust Fund was established as a provision of the Housing and Economic Recovery Act of 2008, which was signed into law by President George W. Bush. The passage of National Housing Trust Fund legislation is a major victory for low income housing advocates and the lowest income people in our country with the most serious needs.   However, due to the recession the funding to the NHTF was temporarily suspended until the Fannie Mae and Freddie Mac were stabilized.

Just prior to the start of 2015, Federal Housing Finance Agency Director Mel Watt lifted the temporary suspension Fannie Mae and Freddie Mac designated for the NHTF. With Fannie Mae and Freddie Mac required to set aside funds for the NHTF beginning on January 1, 2015, HUD published the long-awaited regulations implementing the NHTF.  Reaction from NHTF opponents in Congress was swift, but the NHTF campaign managed to fend off all attempts to raid the NHTF or otherwise prevent HUD from implementing it.

To find out more ways to be involved in the implementation of your states portion of the NHTF or defending the NHTF from cuts please visit our partners at the National Low Income Housing Coalition to see what you can do.