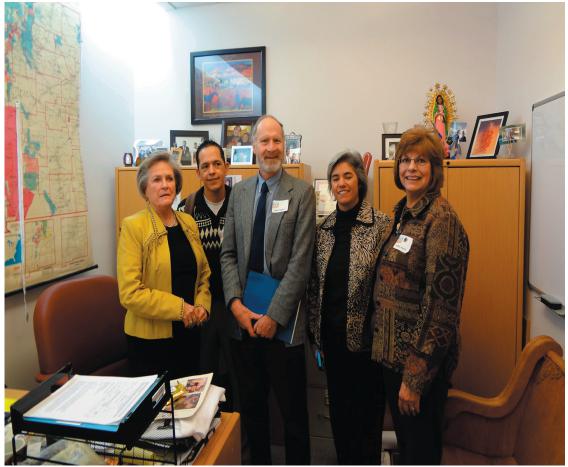 New Mexico affordable housing and homeless advocates saw the results of their ongoing educational campaign when the legislature committed $3 million from the General Fund in the FY13 budget for the New Mexico Housing Trust Fund. After an initial investment in the Trust Fund, it has received $1 or $2 million annually between 2006 and 2008, but has not received any funding since 2009. The New Mexico Coalition to End Homelessness brought more than 60 people from across the state to the capitol for lobby day, focusing on preserving funding for needed housing/homeless programs. The New Mexico Lutheran Advocacy Ministry campaigned closely with the Coalition. Funding for the state housing trust fund was one of the Coalition’s advocacy priorities.

The bill was introduced by Senator Nancy Rodriguez from Santa Fe, who sits on the Senate Finance Committee, and has been a long time advocate for the state housing trust fund. Once the bill was introduced, advocates focused on building support from Legislators and the Governor. The Mortgage Finance Authority prepared a fact sheet in support of the funding. Senator Rodriguez was able to get the $3 million into the budget bill which was passed by the legislature and signed by the Governor.

Since its creation in 2005, the Fund, managed by the New Mexico Mortgage Finance Authority, has received $15 million in state appropriations. These funds have supported more than 30 separate affordable housing projects across the state, providing some 1,000 affordable homes for low and moderate income households. The Trust Fund supports a wide range of housing opportunities for extremely low income households to those earning as much as 120% of the area median income.

The New Mexico Coalition to End Homelessness has highlighted the impact of housing needs in the state. For every 100 extremely low-income households in New Mexico, there are only 30 rental units that are affordable and available to them. Three-fourths of these households are paying more than half of their income just for housing costs. During the 2010-2011 academic school year, Albuquerque Public Schools Title I Homelessness Program served more than 6,000 homeless children.

The New Mexico Mortgage Finance Authority estimates that the Trust Fund’s commitments to date have generated between $150-$200 million in local income (business income and wages), between $14 -$18 million in local government revenues, and as many as 3,500-4,000 jobs.

Lisa Huval, Policy and Advocacy Director for the New Mexico Coalition to End Homelessness, observes, “Deep cuts to the HUD budget will deepen the housing crisis in New Mexico for our low income families. This is unacceptable. We need to increase our investment in affordable housing at the local, state and federal level. While we work to rebuild our economy after the recession, we cannot forget about low income families whose basic housing needs continue to go unmet.”