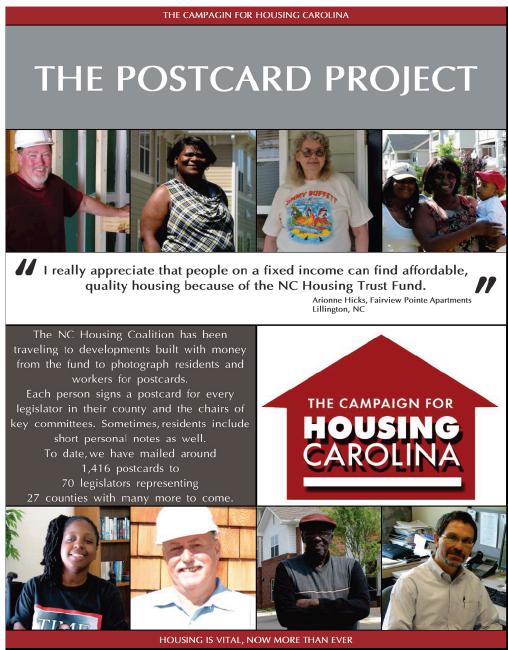 The focus of the Campaign for Housing Carolina is to secure a dedicated revenue source for the North Carolina Housing Trust Fund. Advocates wanted legislators to hear from those who have a safe, affordable place to live because of what the state’s Housing Trust Fund has been able to accomplish. To help realize this goal, the Campaign began the Postcard Project in March 2011.

Staff from the North Carolina Housing Coalition travel to developments built with funds from the Trust Fund to photograph residents and workers for the postcards. Each person signs a pre-addressed postcard to every legislator in their county and the chairs of key committees. Sometimes, residents add a personal note about what their home means to them.

To date, the campaign has mailed approximately 1,416 postcards to 70 legislators representing 27 of the state’s 100 counties. Developers, managers and construction companies help organize events at the developments when staff visit, bringing balloons and snacks. The Campaign uses a software program allowing them to turn photos into Postcards with a small portable printer. Each person photographed gets a framed photo for themselves.

The goal of the Campaign is to secure a minimum of $50 million in annual dedicated funding for the Trust Fund. In 2010, the General Assembly appropriated $10 million and the Trust Fund delivered:

The Campaign was created in 2002 and is led by the North Carolina Housing Coalition, in collaboration with: NC Justice Center, United Way of NC, NC Coalition for End Homelessness, A.J. Fletcher Foundation, NC Association of CDCs, AARP-NC, NC Coalition Against Domestic Violence, Arc-NC, and with the support of the NC Housing Finance Agency.

The Housing Trust Fund is North Carolina’s only state-funded and state-designed resource for financing affordable housing. It is administered by the North Carolina Housing Finance Agency. All funds go directly into bricks and mortar.

The Trust Fund has improved housing in all 100 counties throughout the state and has won three national awards. It has supported 23,029 owner and renter homes with $756 million in funds. This investment created 14,507 construction jobs, $49.2 million in state tax revenues, and $60.8 million in local tax revenues.