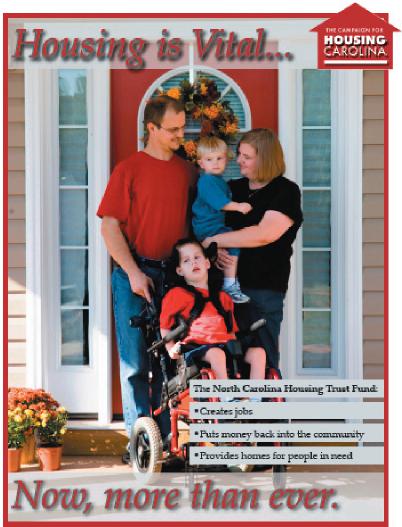 Bills have been introduced in the North Carolina Legislature that would dedicate revenue to the state’s Housing Trust Fund (NCHTF) for the ﬁrst time in its 22 year history. House Bill 574 and its companion in the Senate, S462, would direct a portion of the revenues generated by the state’s excise tax assessed on real estate transfers. Since its creation in 1988, the NCHTF has been funded with appropriations from the General Assembly, totaling $151 million to date.

Since 1995 the Parks and Recreation Trust Fund and Natural Heritage Trust Fund have received more than $620 million in funding from the excise tax. Over the same period, appropriations to the NCHTF have totaled $122 million. In 2010, the NCHTF received $9.5 million in appropriations; under the terms of the bills as introduced, the excise tax would have generated $15 million for the NCHTF last year. “This proposal would begin to address the long term historical inequity between ﬁnancial support for open space and for affordable housing, which are both challenged by the growth of market rate development,” said Chris Estes, Executive Director of the North Carolina Housing Coalition.

The legislation currently has nine sponsors in the House, and ten sponsors in the Senate. Both billspassed ﬁrst readings in their respective chambers and are now before the Committees on Appropriations and Finance, respectively. The introduction ofthe legislation is the result of the efforts of the Campaign for Housing Carolina, a statewide public awareness campaign initiated by the NC Housing Coalition and the Center to Create Housing Opportunities in 2002, and led by the NC Housing Coalition, NC Justice Center, United Way of NC, NC Coalition to End Homelessness, A.J. Fletcher Foundation, NC Association of CDCs, AARP-NC, NC Coalition Against Domestic Violence, Arc-NC, and with the support of the NC Housing Finance Agency. The Campaign’s objective is to build strong and widespread public support for a$50 million annual appropriation to the NCHTF.

The Housing Trust Fund is North Carolina’s only state-funded program that ﬁnances affordable housing. It may be used to ﬁnance home ownership and rental housing, new construction, rehabilitation and emergency repairs, and supportive housing. Administered by the North Carolina Housing Finance Agency, support from the NCHTF provides the greatest share of state resources for supportive housing for the homeless, victims of domestic violence, persons with mental illness, and others with special needs, as well as funding for emergency repairs and accessibility modiﬁcations that allow elderly and disabled low-income homeowners to remain in their homes.

In 2010 alone, the NCHTF supported 1,265 homes and apartments representing $99.3 million in housing construction and rehabilitation. Every dollar invested by the state leveraged $6.70 in additional housing ﬁnancing, and those investments created 2,100

“The commitment to dedicating revenue to the North Carolina Housing Trust Fund will provide affordable housing with a stable funding source that will grow over time, allow for improved planning of affordable housing projects, and increase the supply of housing for those with the lowest incomes. The Housing Trust Fund is vital because it is the only source of funding for North Carolinians with the greatest housing needs,” said Chris Estes.