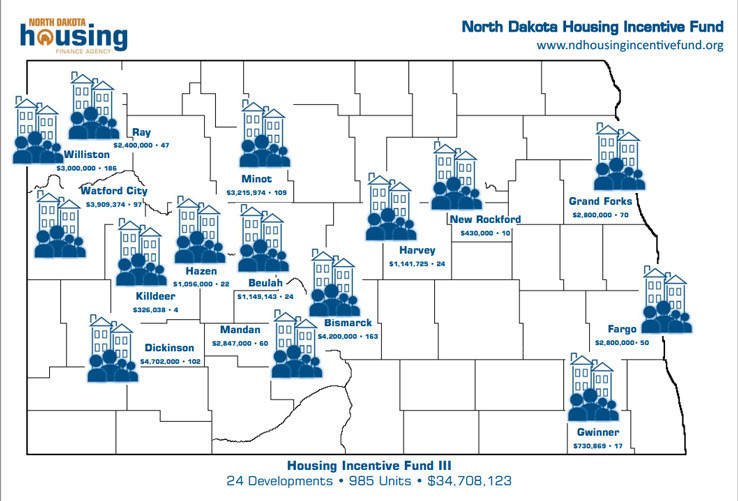 Established by the legislature in 2011, the HIF has invested nearly $50 million in the development and preservation of more than 1,500 homes and apartments for working people and families throughout the state in its first two biennium of operation. The $50 million in HIF funds leveraged an additional $200 million in housing resources to the state. HIF funds are administered by the North Dakota Housing Finance Agency (NDHFA) and awarded in a competitive process.

Leading the advocacy effort to renew the tax credit and commit profits from the Bank of North Dakota was a coalition comprised of North Dakota NAHRO, the North Dakota Coalition for Homeless People, Lutheran Social Services and several of the western communities’ economic development commissions. “The HIF has been the primary tool in mitigating North Dakota’s housing crisis,” said Michael Carbone, Executive Director of the North Dakota Coalition for Homeless People, Inc. “Rents have begun to edge downward and vacancy rates are slowly increasing. We still have a long way to go before the supply and demand for affordable housing are in balance, but at least we seem to finally be moving in the right direction.”

The HIF was created to assist in meeting North Dakota’s need to increase the availability of affordable multifamily housing, especially to house essential service workers and low- and moderate-income families. The HIF prioritizes meeting the housing needs of local, county, school and state employees, long-term care and medical service workers, with a secondary priority of homes and apartments affordable to low- and moderate-income households. At least twenty-ﬁve percent of the fund must be used to assist developing communities with a population of not more than ten thousand to address unmet housing needs or alleviate a housing shortage. At least ﬁfty percent of the fund must be used to beneﬁt households with incomes of not more than 50% of the area median income. Eligible activities for HIF awards include:

The HIF requires NDFHA to conduct compliance monitoring, and utilize Land Use Restriction Agreements and recapture provisions to ensure that rent levels remain affordable for the intended tenants for the agreed upon time period.

The HIF is capitalized by contributions from taxpayers in exchange for tax credits and by a transfer of funds from the Bank of North Dakota. Any individual, business or financial institution with a potential state tax liability is eligible to contribute. A government entity or a tax-exempt organization is not precluded from making a contribution to HIF, however no tax credit certificate will be issued. Taxpayers receive a credit against their state income tax liability equal to their contribution to HIF. The credits are claimed in the tax year that the contribution was made. If a taxpayer cannot t use the entire tax credit in the first tax year, it may be carried forward for up to 10 tax years.

On May 30, 2015, NDFHA announced $34 million in first investments of the 2015-17 biennium that will produce another 985 homes and apartments in sixteen North Dakota communities. The housing will serve families, seniors, and people with disabilities, with 757 of the homes and apartments targeted to serve households at or below 50% Area Median Income, and 285 slated to house local, county, school and state employees, long-term care and medical service workers.  In addition to housing created, the HIF investments will leverage an additional $150 million.