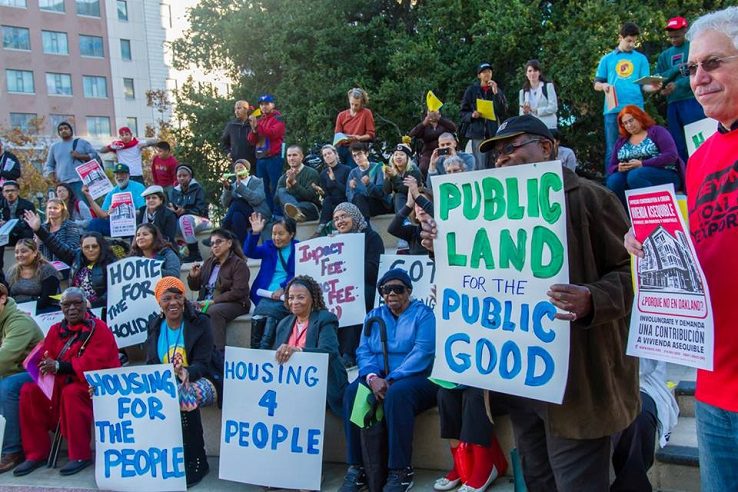 On Tuesday, April 19th, after two years of advocacy and organizing, EBHO (East Bay Housing Organizations) members and the Oakland Community Investment Alliance (OCIA)  were successful in getting the City of Oakland to pass a housing impact fee.   The housing impact fee will be levied on market-rate developments helping the City to leverage millions of dollars to support building and preserving permanently affordable homes for Oakland families.

In the 18 months from August 2014 to March 2016, the median rent for a one-bedroom apartment in Oakland increased 40 percent, from $1,600 to $2,250 a month, according to listing service Zumper . This sharp increase in rent led Oakland City Council earlier in April to declare a housing emergency and commit to tackling the city’s housing issues while also issuing a 90-day ban on evictions and rent increases above 1 percent.

The housing impact fees became one solution.  The approved fees will be phased in and the fee amount is based on where the proposed project is located among three different geographic zones as decided by Oakland City Council. The results are that developers in downtown, Uptown and Lake Merritt will pay $7,000 per market-rate unit starting in September, increasing to $24,000 per unit by July 2018. In West Oakland and parts of North Oakland, impact fees will start at $5,550 per market-rate unit in September, increasing to $19,250 in July 2018. In the area stretching from east of 23rd Avenue and including Coliseum City, fees will start at $750 and increase to $13,000 per market-rate unit by 2020.

The fees will apply to developers submitting building permits for multifamily project on or after Sept. 1. It’s unknown how many developers will rush plans before that deadline.

For EBHO and OCIA this victory is just a first step in solving the affordable housing crisis in Oakland.  The impact fee is estimated to generate approximately 600 affordable homes over ten years—Oakland needs closer to 14,675 more affordable homes. Furthermore, advocates believe the fees are too low and phased in too slowly.  Jeffrey Levin, speaking at the council meeting on behalf of EBHO, expressed this sentiment, “We are very concerned that the city is not acting like there is actually an emergency out there in the community. We’re here tonight with very mixed feelings,” Levin said. He and others criticized the council for what they saw as an overly cautious approach, opting to phase the fees in on a graduated scale, so they won’t be fully implemented until 2020.

However, through successful organizing advocates have made the ordinance stronger by:

EBHO, OCIA and others will continue to fight for other revenue options for Oakland and across the region by ramping up outreach and support for a proposed Alameda County Housing Bond.