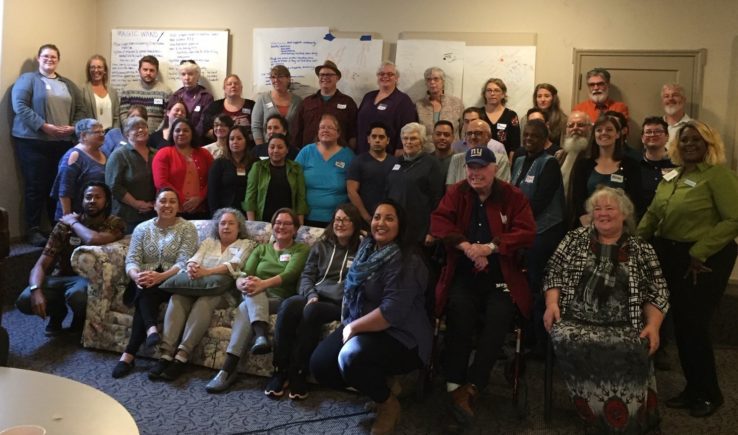 Neighborhood Partnership in collaboration with Community Change launched a new statewide resident organizing network in Oregon on October 8, 2019. Building from the models that Community Change has developed with Housing California with RUN (Residents United Network) and with the Washington Low Income Housing Alliance with RAP (Resident Action Project), the new Oregon network, ROC (Residents Organizing for Change), will build a powerful movement that centers those directly impacted by the lack of decent, affordable homes in order to win progressive housing policy.

More than fifty people attended the inaugural resident organizing network summit, most all of whom were residents of affordable housing or front line staff working for housing organizations.  The agenda for the summit included a focus on the how and why’s of organizing, Oregon’s fraught history of racial injustice relating to housing, and the identification the key issues the network will focus on in the coming years. Summit participants engaged in a process to select the name for the network.  After spirited deliberation on more than a dozen name options, the majority of the group voted ROC as the winner.

Following the selection of the network name, summit participants self-selected among three workgroups intended to set the initial course and structure for ROC: Structure of the network, member recruitment, and leadership development. The Summit ended on a high note, with a march to the capitol steps with residents and staff chanting for housing justice.  For many Summit attendees, the trip to the Oregon state capitol was first.  Now united as members of ROC, those same attendees pledged to come back together and push for housing justice.

The success of ROC’s kick off summit is directly attributable to the ground work laid by ROC’s lead organizer Reyna Gillet.  Following a series of meetings co-hosted by Neighborhood partnership and Community Change to build buy in and enthusiasm from Oregon nonprofit housing providers and homeless service providers in the first half of 2019, Reyna completed more than thirty outreach meetings to recruit residents, including fifteen house meetings, called “power hours,” at affordable housing communities across the state in July-September, each with 15-30 residents in attendance. The “power hours” were used to inform people about the new network and welcome them to participate. Following up from the “power hours”, the organizer held one-on-one meetings with interested residents.

Leaders and staff from RUN and RAP also contributed to the launch of ROC, participating in the early buy-in meetings both virtually and in person.  In addition, Reyna attended both the RUN and RAP Summits in 2018, and participated in the RUN-RAP cross train with a delegation of front line staff from housing providers in August 2019.  The opportunities for cross pollination and inspiration with RUN and RAP  grounded the Oregon work, and help set a pace and structure that will inform ROC’s growth.

To learn more about ROC, go to https://www.oregonhousingalliance.org/residents-organizing-for-change/