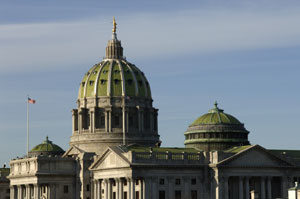 Four years of steadfast advocacy paid off in late November for the Housing Alliance of Pennsylvania: Governor Edward Rendell signed the Pennsylvania Housing Affordability and Rehabilitation Enhancement Program (PHARE) into law, establishing a state housing trust fund. While the PHARE (HB60) legislation does not include funding, the law sets the framework for the administration and implementation for the housing trust fund, outlines the program requirements and preferences, and establishes a structure to effectively utilize potential resources from the National Housing Trust Fund.

“The passage of PHARE and the creation of a state housing trust fund lay the foundation for Pennsylvania to provide new and desperately needed housing opportunities for hardworking families, seniors and many other community members that have been left behind by the housing market,” said Housing Alliance Director Liz Hersh. “The overwhelming support for HB60 in both Chambers shows that our state leaders understand that investing in housing means more good jobs, better looking neighborhoods and stronger local economies.”

PHARE creates a state housing trust fund that can be used for redevelopment, construction, rental assistance, foreclosure prevention, homeownership counseling, and special needs housing. PHARE requires that 30% of the funds beneﬁt households below 50% of the area median income, and establishes a preference for “green” building standards. The Pennsylvania Housing Finance Agency is required to develop a proposed annual plan with public comment that must be published and submitted to the chairs and minority chairs of the state Senate Urban Affairs and Housing Committee and the House Commerce Committee.

Despite passing both chambers of the Pennsylvania Legislature with strong support, PHARE was on the verge of dying in early November after the Pennsylvania House announced that it would not reconvene for the remainder of the legislative session. Though the House had passed HB60 in April by a vote of 179-8, the version that passed the Senate in October with a 47-2 vote margin had changes that required a return to the House for concurrence.

Unwilling to give up with victory so close, the Housing Alliance sounded the alarm both to their immediate allies and to other constituencies that would also have had legislation stranded by the House adjournment. Including HB60, 21 bills were in limbo awaiting concurrence due to the early end of session in the House. Within a day of the House announcement, several hundred Housing Alliance supporters had contacted their Representatives. Over the next couple of days, the supporters of the other 20 bills weighed in. Less than a week after announcing adjournment, the House reconvened and HB60 was on its way to Governor Rendell’s desk.

The close call for HB60 evoked some haunting memories for the Housing Alliance. In 2008, the Housing Alliance had pushed two separate housing trust fund bills, one in the House and one in the Senate. Each bill passed its own chamber only to run out of time before one of the bills could pass the other chamber.

“We had come way too far for a repeat of 2008,” said Hersh. “When word got out that the House might adjourn, our membership sprung into action. We were having our annual meeting days after the announcement, and you can believe that saving HB60 was the topic in everyone’s conversation. We were able to mobilize, and along with the sponsors of the other 20 bills, we were successful at getting the House to return and complete their important business.”

HB60’s legislative path was never easy. Caught up in the partisan current of national politics, HB60 was subject to several unfriendly amendments including limitations on sources of funds for the Housing Trust Fund that would have prohibited the use of any state funds, as well as possibly prohibiting private donations, foundation support and federal funds. An amendment limiting the source of funds was included in the House version that past in April. The Senate version stripped out that language, and was one of the issues requiring the concurrence vote.

“Despite getting caught up in some politics, one of the reasons we prevailed is that we cast PHARE as a nonpartisan issue throughout our campaign,” said Hersh. ”As these economic difﬁculties continue, almost every elected ofﬁcial will have increasing interest in helping constituents meet their housing needs.”

With the Housing Trust Fund established, the Housing Alliance is now focusing its advocacy on securing funding. Housing Alliance supporters are already planning meetings with the newly elected legislature. With many of the ofﬁcials in the Statehouse newly elected, there is a substantial need for education and outreach. In addition to continuing its very successful media advocacy work and public opinion research, the Housing Alliance is planning to release a three-part report on reshaping policy for homeownership, rental housing and homeless services that will both evaluate the current systems and make recommendations.

The Housing Alliance will also explore the legislative prospects for funding targeted components with the Housing Trust Fund, such as the state’s rehabilitation program, which has a great track record. The Housing Alliance will also be partnering on a study that highlights the importance of public investment in spurring the economic engine of the affordable housing development industry.