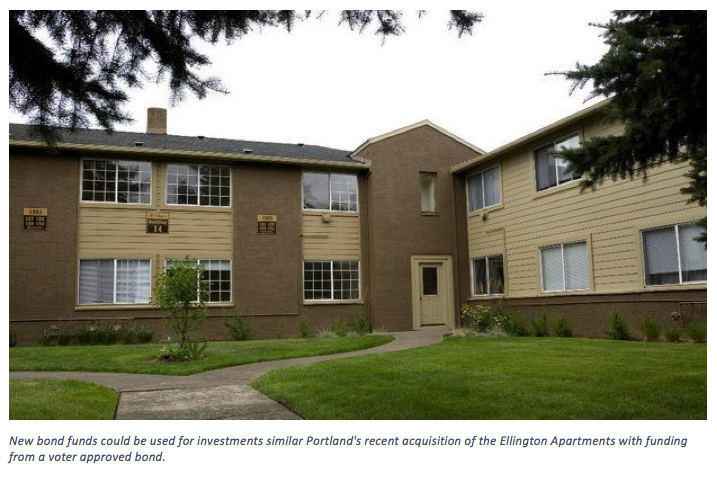 In late March, the Portland City Council unanimously approved an ordinance that provides $9 million for land acquisition and long term financing for affordable housing through the sale of interim financing bonds paid by revenues generated by Portland’s short-term rental tax. The bond funds will contribute to the development of an estimated 300 affordable homes, serving households at or below 60% area median family income.

In response to a Mayoral declaration of a Homeless Emergency in fall 2015, the Portland City Council directed a minimum of $1.25 million from a 2014 Transient Lodging Tax for short term rentals to the Housing Investment Fund (HIF).  The HIF is a local housing trust fund managed by the Portland Housing Bureau that was established in 1995 to preserve or produce affordable housing for households at or below 60% of the Area Median Income.  While the HIF has received several investments from City Council over the past two decades, the commitment of short term rental funds were the first dedicated revenue source for the housing trust fund.

The Portland Housing Bureau estimates that roughly 2,700 whole homes offered on the short term rental market in Portland, of which 1,000 had been heretofore affordable month-to-month available rentals.  Based on real estate and construction costs, replacing those affordable rental homes and apartments would cost more than $380 million.

In addition to City Council dedicating and bonding of funds from short term rentals, the severe lack of affordable rental housing and subsequent rise in people experiencing homelessness in Portland has spurred several other significant investments in affordable housing.  In November 2015 the City Council raised the percentage of the Tax Increment Financing (urban renewal) affordable housing set aside from 30% to 45% of urban renewal funds, followed in the summer of 2016 by an unanimous vote to establish an Inclusionary Housing Fund (IHF) and enacted a construction excise tax that will generated an estimated $8 million for the IHF annually.  On November 8, Portland voters weighed in at the ballot box, with 62% approving an historic $258 million bond for affordable housing.

The bonds passed by Council are General-Fund backed bonds with the first source of payment revenue from short-term rental revenues, if sufficient, and if not sufficient, from available General Fund revenues. With the sharing economy being relatively new, bond underwriters wanted to discount the cash flow to hedge against some future market change in consumer habits or a business setback by Air BNB and other short term rental enterprises. Because the funds are essentially general obligations of the city, Oregon law requires that the assets will be owned by the city. The Portland Housing Bureau plans to use the funds to purchase land that could either support vertical development funded by other City resources (such as the $258 million bond authorized by voters) or potentially lease the land to a non-profit or private developer for the development of affordable housing pending resolving leasehold structure issues related to the Oregon Constitution.

All sites acquired (or disposed of) by the City will require at least four votes from the five person City Council.  The Bond sale will occur in May, 2017. The Bond will be outstanding 10-15 years.

For more information about the HIF, contact Martha Calhoon, Public Information Officer at (503) 823-3239 or Martha.calhoon@portlandoregon.gov