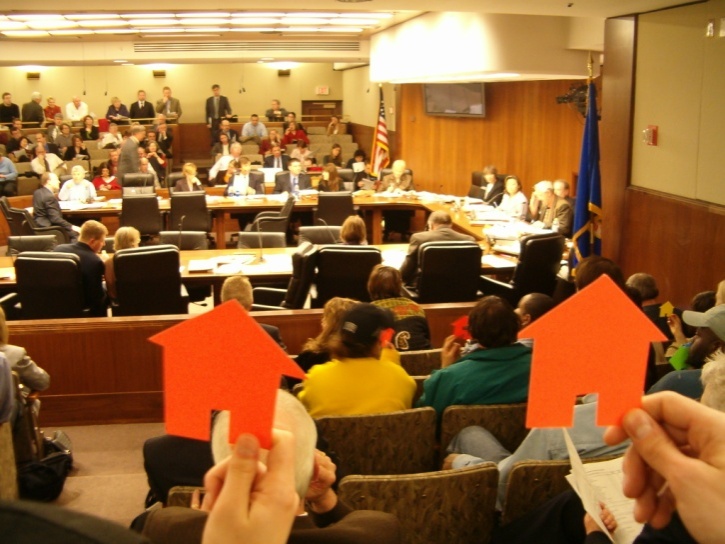 “It is a great relief that a portion of the attorney general settlement funds was appropriated for the state and local housing trust fund programs, as the recent spate of annual sweeps of housing trust fund monies into general revenue has hurt Florida’s families, our most vulnerable cities, our job market and the economy as a whole,” observes Jaimie Ross, President of the Florida Housing Coalition and Facilitator of the Sadowski Housing Coalition, which advocated for the creation of the Florida Housing Trust Fund.

While $40 million goes to SHIP and $60 million to SAIL, the missed opportunity is appropriating the dedicated funds committed to the Sadowski Affordable Housing Trust Funds for housing—some $204 million that would have been available from documentary stamp taxes for the 2013 session.  With Florida’s dubious distinction of having some 6,000 military veterans and more than 83,500 children who experience homelessness each year in Florida, housing advocates were hoping a stronger level of support from the legislature.

The SHIP program uniquely funds every county throughout the state and entitlement cities with a formula amount of funding each year to help provide a home for the state’s most vulnerable population.  Housing advocates are hopeful that the impact from $100 million will create a voice to bring back funding for the Sadowski Affordable Housing Trust Funds.

The Minnesota legislature increased funding for housing and homeless programs by $33 million.  The Homes for All Campaign, with more than 80 statewide organizations involved, organized ambassadors in each legislative district and engaged a broad range of organizations in the campaign.

Special to this campaign, was a Minneapolis Star Tribune commentary late in April from five Superintendents of the largest school districts:  Minnesota students need shelter before and after the bell.  Nine percent of Minneapolis school children are homeless.  The commentary says:  “Housing is one of the best investments the Legislature could make if it wants to help education.  Our student’s future quite literally depends on this foundation, and our community’s future depends on these students.”  Their powerful arguments were accented with “Schools can help kids meet some basic needs, but we can’t bring homeless kids home.” 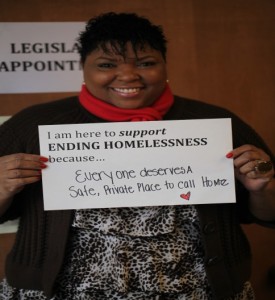 WLIHA homeless advocate at the capitol during the legislative session.

Washington affordable housing and homeless advocates were victorious in securing $70 million for affordable housing during the 2013 legislative session. Almost all of this $70 million is new money from state bonds and includes $51.5 million for the state’s Housing Trust Fund.  The Washington Housing Alliance and other state advocates are celebrating one very tough session.

Michele Thomas, Director of Policy and Advocacy with the
Washington Low Income Housing Alliance observes: “In Washington, we have a diverse range of stakeholders advocating year round for the Housing Trust Fund and we have strong affordable housing champions leading our state House. Despite another major budget deficit, our determined advocacy was successful in securing a significant allocation for affordable housing – $51.5 million for our Housing Trust Fund and $18.5 for other affordable housing projects, plus $10 million for weatherization of low-income homes. We are happy that this allocation will secure housing for thousands of people across our state and now that the session is over, we are already mobilizing advocates for interim advocacy activities like tours of HTF funded homes.”

Starting last year, the capital budget included a ranked list of projects eligible for the Housing Trust Fund appropriation. The Legislative Evaluation and Accountability Program Committee (LEAP) was established in 1977 to be the legislature’s independent source for developing budgets, tracking revenue, expenditure, and staffing activity. The LEAP process will again allocate funding within the Housing Trust Fund to specific activities, including:

$9.019 million for housing for people with developmental disabilities (10 projects named).

There is also an alternate list of projects should one of the projects in the above categories not be eligible or ready to proceed. The ranked alternate list includes 47 projects requesting almost $48 million from the Housing Trust Fund.

The Coalition on Homelessness and Housing in Ohio (COHHIO) won full funding for the Ohio Housing Trust Fund at $53 million.  The Trust is a Must … for our community, for our economy, for our future … focused on the impact the trust fund has had in every county of the state.

Bill Faith, Executive Director of COHHIO points out:  “Whether we’re a resident or a neighbor, a developer or an employee of a Trust Fund project, we’ve learned that the Trust is a must to strengthen our community, build our economy and improve our future.”

Governor John Kasich signaled his support for the Ohio Housing Trust Fund by including the full $53 million in his budget.  Advocates, as they met with their legislators, heard good impressions about the Trust Fund, due in large part to field partners who have been educating their lawmakers.  COHHIO never assumed protecting the Trust Fund from budget raids would be easy. Nearly 100 housing advocates all over the state volunteered to be a part of the “Housing Trust Fund Emergency Alert System” to call and email legislators and reach out to local press on behalf of local Trust Fund projects and programs.

COHHIO supported advocacy with a variety of tools and talking points, including the “The Trust is a Must” brochure.  An “Economic & Job Creation Impact Study” by Vogt Santer Insights documented that among the total economic impact of Ohio Housing Trust Fund expenditures from 2006-2009 were earnings of more than $829 million for almost 32,000 workers. Each dollar of Trust Fund awards results in an overall impact of $14.54 because the awards attract other funds and their collective infusion into the regional economy results in direct, indirect and induced expenditures in many industries.

The Campaign was also bolstered by a study from The Mental Health Advocacy Coalition and The Center for Community Solutions highlighting statewide data regarding mental health supportive services that are not reimbursable by Medicaid in Ohio. The study, “By the Numbers 2: Developing a Common Understanding for the Future of Behavioral Health Care: Analysis of Ohio’s Mental Health Non-Medicaid Spending,” reported on total spending on non-Medicaid services by 46 boards. The largest category of spending is housing and it comprises about 48 percent of the total.

The Campaign also benefitted from state data demonstrating that the Ohio Housing Trust Fund has benefitted every county in the state. More than a million people from every one of Ohio’s 88 counties have benefited directly from the trust fund’s programs and services.

Housing for All in Washington, D.C. celebrated when Mayor Vincent Gray released his proposed budget which included $100 million in additional money for affordable housing.  The Mayor proposed $20 million to compensate for previous cuts from the Housing Production Trust Fund and a one-time boost of $67 million to support the production and preservation of affordable housing for low and moderate income households.  The Council subsequently unanimously approved a $63 million boost for the trust fund—the largest one-time investment in the trust fund in its ten year history.

Bob Pohlman, Executive Director of the Coalition for Nonprofit Housing and Economic Development (CNHED) said: “This is a tremendous first installment toward the 10,000 affordable homes goal established by the Comprehensive Housing Strategy Task Force.  Lots of credit goes to the residents and members who helped make the Housing for All Campaign such an effective force in advocating for the budget.”  A key goal of the task force was to create or preserve 10,000 affordable housing units by 2020.  One of the Bridges to Opportunity report’s primary recommendations was to increase the city’s financial commitment to the trust fund. The Housing Production Trust Fund is funded through a deed recordation and transfer tax, yet recently funds have been depleted and diverted to support other programs.