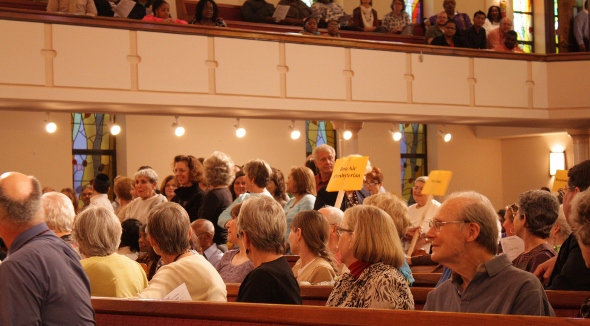 Richmonders Involved to Strengthen our Communities (RISC) in Richmond, Virginia brought hundreds of its leaders together to call on City Council to implement the City’s Affordable Housing Trust Fund.

RISC is a DART-affiliated coalition of fourteen Richmond-area Baptist, Presbyterian, Jewish and Catholic congregations which selected the housing trust fund as one of its key community issues last fall. The City created the Affordable Housing Trust Fund in 2007, but the Board has yet to be appointed and a dedicated source of funding has yet to be approved.

The Rev. Micah Jackson, RISC co-chair and pastor of the Seventh Street Memorial Baptist Church, said “we have been and will continue to follow this through to the end.” RISC chose its Nehemiah Action as an opportunity to report on responses from City officials to three key questions:

Mayor Dwight C. Jones has included $500,000 for the trust fund in his bud-get for the coming fiscal year. RISC has continued to stress the importance of creating a sustainable fund with ongoing dedicated revenues.

Council President Kathy Graziano, who sponsored the original housing trust fund ordinance, but could not attend the Action due to a prior commitment, said: “Is it possible to do it? I’m not sure. These are tough economic times.”

Council Vice-President Ellen Robertson has introduced an ordinance that sets up provisions for the trust fund and its board, amending the original ordinance by clarifying its potential uses, delineating responsibility of the Advisory Board, and assigning administrative responsibilities.

The Committee voted to send the ordinance to the full council with a recommendation for approval. The City Council is scheduled to review the revised ordinance that would commit to establishing the Advisory Board and further define operations of the Trust Fund in April.