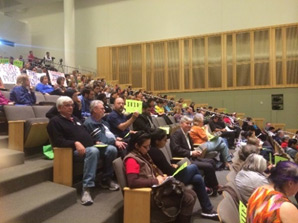 More than forty-five organizations signed onto a letter to the Mayor and members of the City Council in support of the affordable housing impact fee. The letter highlighted recent events affecting the City’s resources to address affordable housing needs, including: the loss of redevelopment funds, current limitations on inclusionary zoning, and the reduction in federal affordable housing funds. “At the same time, the cost of housing—for our community’s teachers; service members; nonprofit employees; artists; seniors; individuals with disabilities; low-income families; service, healthcare, retail, and other low-wage workers; and public sectors employees including police officers and firefighters—is skyrocketing,” advocates noted. Several cities in the region have adopted these fees as a new means of funding affordable housing: Berkeley, Cupertino, Fremont, Mountain View, Santa Rosa, San Carlos, San Francisco, and Walnut Creek. Projections indicate that the new fee could raise as much as $25 million a year in new revenues or funds sufficient to build 10,000 affordable homes in San Jose in the next two decades.

Working Partnerships USA Executive Director, Derecka Mehrens, points out that the new fee victory is an appropriate subsequent action to the voter-approved higher minimum wage victory won in 2013. “This monumental affordable housing victory is the culmination of all of our tireless advocacy efforts, organizing, research and community mobilization,” she confirmed in an email to supporters.

Prior to the passage of the new fee, a nexus study, prepared by Keyser Marston Associates, confirmed that a nexus did exist and that the use of a Housing Impact Fee for the purpose of increasing the supply of affordable housing in San Jose is legally justified. The Nexus Study also establishes a reasonable relationship between the need for affordable housing units and new market-rate rental residential development. New market-rate residential rental development leads to a net increase in new residents, and the increase in goods and services required by these new residents leads to an increase in job creation in the City including jobs in the service and retail sectors (e.g., teachers, restaurant workers; pet care; maintenance workers, etc.) with lower wages that will not allow these workers to obtain market-rate housing. This results in an increase in the need for new housing affordable to extremely low, very low, low, and moderate income households, which the Housing Impact Fee will be used to help provide. The Housing Impact Fee is also consistent with the proposed goals of the General Plan, which reads: “Preserve and improve San Jose’s existing affordable housing stock and increase its supply such that 15% of all new housing stock developed is affordable to low-, very low-, and extremely low-income households.”