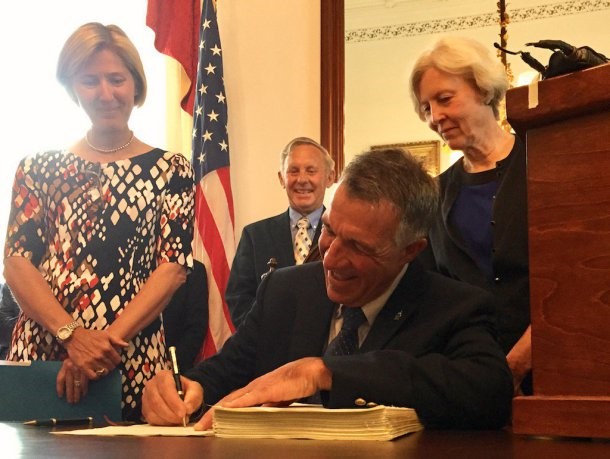 After a contentious budget fight, in late June the Vermont Legislature passed and Governor Phil Scott signed a budget that included an historic investment of up to $35 million in revenue bonds to support the creation of much needed affordable housing for Vermonters.

“It is cause for celebration, and it is cause for hope that we can move closer to ensuring every Vermonter has a safe and decent place to call home,” wrote Chris Donnelly, Director of Community Relations for the Champlain Housing Trust.  “After years of education, outreach and advocacy, we’ll soon see some significant movement towards alleviating the severe housing affordability challenges Vermonters face,” Donnelly continued.

Advocates started planting a seed for a big investment in the housing trust fund in 2014 when Champlain Housing Trust (CHT) and Housing Vermont coordinated an educational outreach plan, supported by many others, that included a series of widely disseminated white papers connecting affordable housing to health, education, homelessness and more. The white papers had two outcomes.  First, they contributed to the understanding on both sides of the aisle in the statehouse of the value of affordable housing. And, importantly, they created a base of support. (The white papers can be found http://www.getahome.org/learn-more/publications , scroll down to “housing white papers.”)

Last year, during open gubernatorial campaign, CHT and Housing Vermont again teamed up, along with the Chittenden County regional planning organization, to launch the Building Homes Together campaign that advocated for an increase in overall housing production in Vermont’s most populous county, with a goal that 20% would be affordable. That effort garnered the support of prominent leaders from businesses and municipalities, housing and homeless advocates and legislators, leading to a high profile launch

As the election neared, the coalition leaders met privately with and gave tours to gubernatorial candidates to press their case for affordable housing investment.  Furthermore, during the session, the Vermont Housing and Conservation Coalition had a very successful legislative day in early February, with testimony in a dozen committees – all in one day.  Advocates organized three press conferences in support of the bond.  Moreover, throughout the session at key moments affordable housing leaders from across the state stepped up their advocacy on the bond.  The constant drum beat for affordable housing and pressure, in the end, proved victorious.

The housing bond, which was introduced by Governor Phil Scott and supported by Senate President Pro Tem Tim Ashe and House Speaker Mitzi Johnson as well as many business and municipal leaders will act as an economic stimulus for Vermont communities by matching state, federal, and private sources to leverage approximately $2-$3 for every one dollar of bond funds would result in between $70-$100 million more to build and renovate affordable housing throughout Vermont.

“We are incredibly excited that the housing bond made it across the finish line this year,” said Vermont Affordable Housing Coalition Coordinator Erhard Mahnke. “This was a huge team effort from so many people — from the Governor and his team to key legislative leaders, mayors, VHCB’s dedicated staff, and all our community housing partners and homeless service providers. It will have a tremendous impact on Vermont’s long standing affordable housing needs, providing safe, stable homes for low and moderate income working Vermonters, people with special needs and those without homes.”

Tim Ashe, President Pro Tempore of the Vermont Senate, said, “I’ve seen the housing shortage up close. In my time at Cathedral Square, we’d fill up new buildings within hours. Literally. So when I met with Governor Scott in November and we both expressed a strong interest in seeing more housing supply, I knew it was a matter of how we’d do it, not if we’d do it.”

The Vermont Housing & Conservation Board will use $35 million in new funding for the creation of rental housing and home ownership opportunities for 550-650 low- and moderate-income Vermonters over the next two to three years. The bold, new initiative represents the largest state investment in housing in more than a decade. The revenue bond will be issued by the Vermont Housing Finance Agency. It is expected to yield $33-34 million in proceeds and will be paid by a $2.5 million in annual revenue from the property transfer tax over 20 years, through 2039.

About the bond, Governor Scott said, “When workers are unable to find adequate, affordable housing, economic growth is constrained. Vermont has a very low rate of rental vacancy and we need to increase access to homeownership. This effort will ratchet up the production of new housing to serve households at a wide range of incomes, spur economic growth, create jobs, and have a significant impact on Vermont’s supply of housing.”