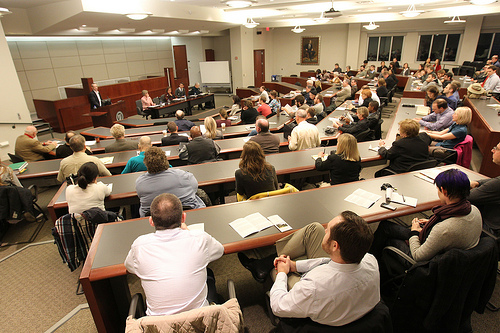 Reverend Bill Barnes has been working on a housing trust fund in Nashville, Tennessee for seventeen years and advocating for improved housing conditions throughout the county for more than five decades.  This year, Mayor Dean included in his State of Metro address that his administration planned to establish an Affordable Housing Trust Fund and Nashville is providing $3 million in funds to give the fund a start. When Reverend Barnes announced:  “Nashville Mayor Karl Dean is doing that, so we finally have a housing trust fund in Nashville!” advocates knew it was real.

Named to honor Reverend Barnes’ commitment, the Barnes Fund for Affordable Housing is expected to generate 100 new affordable homes, while improving the affordability of 200 existing housing opportunities each year, all supported by grants and ongoing annual investments from capital budget funds. The purpose of the Fund is to assist in the development and provision of good quality affordable housing for Davidson County.  “Too many in our city are burdened by housing costs … forcing them to choose between paying their rent or buying food, buying food or buying basic needs for their family,” said Dean during his State of Metro address.

The ordinance establishes a Metro Housing Trust Fund Commission to oversee the Fund.  The seven-member commission will include one member designated by the Metro Development and Housing Agency, one member from the council designated by the vice mayor, and five members appointed by the Mayor. The Commission will oversee the management and operation of the Fund; promote the study and development of good quality affordable housing; support education about and creation and development of good quality affordable housing; and help create rental housing, housing for the disabled, and long-term affordable home ownership opportunities throughout Davidson County.

Affordable housing and homeless advocates in Nashville have been working to create a housing trust fund for over 12 years, studying the issue, creating proposals, and building a strong voice in support of Metro Nashville taking such a step.  The first organizing effort was in 2001, through the housing committee of Tying Nashville Together (a faith-based coalition to address social problems).  Later, the Nashville Homeless Power Project studied and organized around a proposed housing trust fund.  Eventually an ad hoc task force, composed of housing and homeless advocates and agencies, came together and studied alternative revenue source options and program components for the trust fund.  This group produced the first actual document outlining uses and administration of the fund in 2006.  This document was presented to both local and state officials, but did not gain the support necessary to dedicate public revenue.  Four years later, a group of Cal Turner Fellows from Vanderbilt University brought renewed attention through a two-year research project and helped lay the foundation for Mayor Dean’s proposal. The Cal Turner program enabled several students to study best practices, dust-off and revise the earlier proposal, and hold a public forum to explore the concept.  According to Rusty Lawrence of Urban Housing Solutions, “It’s hard to believe that we finally have a Trust Fund in Nashville…it makes it worth all the years of studies, meetings, and organizing efforts”.

There is substantial evidence and commitment from the advocacy community that a Nashville Housing Trust Fund needs and can find an ongoing dedicated source of public funding, building from the initiative established by Mayor Dean.

NEXT Oregon Dedicates Revenue to Increase Housing Opportunity for Veterans