Voters in Lawrence, Kansas approved reallocating 1/20th of a penny of city sales tax to an affordable housing trust fund on November 7, 2017, providing the first dedicated source of revenue to the fund. The Lawrence Affordable Housing Trust Fund (AHTF) encourages and supports the acquisition, rehabilitation, and development of affordable housing and emergency shelter, as well as supportive services necessary to maintain independent living. The approved sales tax is estimated to raise $10 Million from April 2019 through 2029.

“I think that this affirmative vote shows that the community understands the need and is willing to do what it takes to meet that need,” says Matt Sturtevant, Chair of the City’s Affordable Housing Advisory Board, member of the Affordable Housing Steering Team for Justice Matters and Pastor at First Baptist Church.  “This trust fund has the potential to systemically change our community by moving families from crisis mode to rebuilding hope and their futures.  Lawrence has shown that they are ready to invest in the benefits, and I am honored to share the table at the Affordable Housing Advisory Board with those who have given their time and energy to making sure that that work is effective, sustainable, transparent, and looks out for those who need it most.  I think we are on our way to building a healthier and stronger Lawrence.”

The Lawrence City Council established the AHTFund by ordinance in 2001 to provide a funding mechanism to support the City’s affordable housing strategy.  The AHTFund is currently administered under the auspices of community development within the Planning and Development Services Department of the City of Lawrence. Eligible uses for the AHTFund include property acquisition, new construction for rental or sale, rehabilitation including moving structure for rental or sale, and housing-related services.  The ordinance establishes an Affordable Housing Advisory Board of no less than eight members to serve in an advisory capacity to City Council on the implementation of the AHTFund, including conducting review of applications for AHTFund resources, making recommendations on funding awards, and submitting annual reports to City Council. The ordinance did not commit funding to the AHTFund.

Justice Matters, a non-profit community action organization comprised of 21 faith organizations in Lawrence and a member of the DART network, played an instrumental role in building the political will among elected officials and the public to commit ongoing public resources to the AHTFund.  Despite a clear need to invest in affordable housing (City funded studies in 1993 and 2004 demonstrated a need for at least 4,000 new affordable homes and apartments), neither the City of Lawrence nor Douglas County were taking action. With the formation of Justice Matters in 2014, the conversation shifted thanks to people power.  Annual Nehemiah Action Assemblies, an activated base of members, and an unwavering persistence from Justice Matters got the housing revenue measure on the 2017 ballot and helped secure the votes to win. Justice Matters members contacted more than 14,000 voters and raised more than $10,000 in donations to support the Yes campaign.

“The November 7 ‘Yes Vote for Affordable Housing’ is the single greatest opportunity we have to change the lives of our friends and neighbors who suffer just to survive,” says Steve Ozark, Affordable Housing Steering Team Member for Justice Matters.  “Having a safe, affordable place to call home is a basic need, and something many of us might take for granted.  Thousands of families will be affected by the accumulation of pennies.” 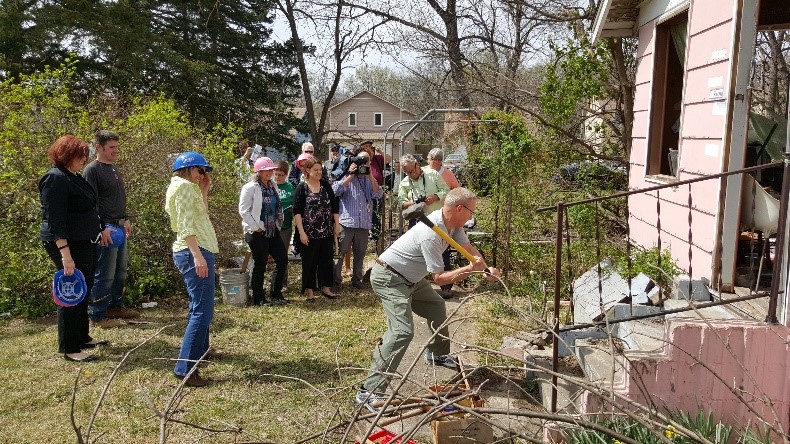 The success of the pilot project, shown here in the demolition phase, paved way for increasing investment in AHTF.

Justice Matters jump started the housing trust fund revenue conversation at its 2015 Nehemiah Assembly, which led to City staff allocating $100,000 to put into an affordable housing pilot project to demonstrate the impact of local funds.  The successful three-building development, currently provides homes to 22 people in three families, including 17 children, and with a requirement that the properties are permanently affordable.  Building on the accomplishment of the pilot project, in 2016 City Commissioners approved $300,000 for the AHTFund for FY2017-2018 budgets, and $350,000 for FY2019-2021.  Beginning in April 2019, the AHTFund will receive an additional $1 million a year from the sales tax.

“The Lawrence Community has taken a great step towards addressing the growing housing inequality and struggles for local families, many with good jobs who cannot afford to live where they work”, says Rebecca Buford, Director of Tenants to Homeowners and AHAB Member.  “Affordable housing not only addresses basic shelter needs, but is essential for economic development and job growth. Creating affordable places for teachers and social workers to live with community dollars is an economic jump start like any incentive policy, but also benefits families with modest means. It creates stability for families and no one argues with that.”