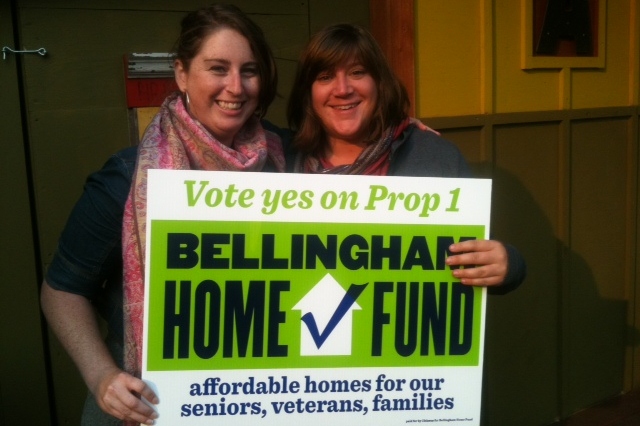 Fifty-six percent of voters in Bellingham, Washington approved a property tax levy increase in November 2012 to create a local housing trust fund that will collect $21 million over the next seven years.  Bellingham and Seattle are two jurisdictions to take advantage of Washington’s law enabling a county, city or town to impose additional regular property tax levies to finance affordable housing for very low-income households when authorized by a majority of the voters in the tax district voting on the proposition. 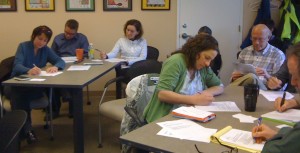 Housing and homeless advocates ran a strong campaign that began with a core group of committed advocates meeting sporadically in the fall of 2011.  By March 2012, the coalition of more than a dozen organizations had formed to champion the Bellingham Home Fund, including Opportunity Council, Catholic Housing Services, Whatcom Peace and Justice Center, and Whatcom Volunteer Center.  Ninety people representing 77 organizations attended the campaign launch in April, and the momentum of the campaign grew steadily leading up to the election, including an impressive field campaign that had supporters knocking on doors for the 8 weeks prior to Whatcom County mailing out the ballots to registered voters.

“The campaign was so successful because we built an impressive coalition of endorsers that included the local hospital, builders, churches, and other organizations that had never before endorsed a political campaign. We also stayed relentlessly on message, which was focused on people who need help, and that’s what motivated voters”, said Greg Winter, the director of the Whatcom Homeless Service Center. “This will be the most important and strategic homeless prevention initiative our community has conceived.”

In addition to committed, organized group advocates, the Bellingham Home Fund also benefited from strong support from members of the Bellingham City Council.  In June 2012, the City Council voted unanimously to place the levy on the November ballot. City Councilman Seth Fleetwood led the effort to gain Council support. He was joined by Councilman Terry Borneman as a co-sponsor of the ordinance. Significantly, all seven Council members also lent their names to the campaign as endorsers. 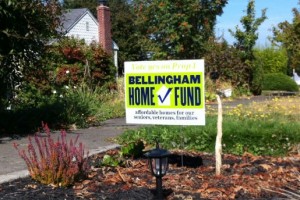 The Bellingham levy imposes a tax of thirty-six cents per thousand dollars of assessed property value, generating $21 million over 7 years for the Bellingham Home Fund.  In 1995, the Washington Legislature enacted RCW 84.52.105, which authorizes cities, counties and towns to impose an additional regular property tax levy up to fifty cents per thousand dollars of assessed value of property for up to ten consecutive years.  The ability to impose a levy is contingent on a city, county or town declaring an emergency in respect to the availability of affordable housing. Since the passage of RCW 84.52.105, the City of Seattle has passed 3 housing levies (1995, 2002 and 2009).  In November 2009, an astonishing 65.8% of Seattle voters approved the Seattle Housing Levy, which will generate $145 million for housing.  Prior to the state law, Seattle had passed a levy (1986) and a housing bond in (1981).

The Bellingham Home Fund used the Seattle levy as a model as they developed their proposal and throughout the campaign. Back in 2008, a Whatcom County Housing Affordability Taskforce identified a levy as a key action to meet local housing need, citing the success of the Seattle levy.  Once the Bellingham Home Fund campaign was underway, advocates from Seattle offered a range of support and encouragement.

“Our Seattle friends really helped us get started on the right foot: with money, with campaign advice, and with technical assistance to flesh out the details of our implementation plan”, said Winter. “We sincerely hope that many other communities will be inspired to take action toward their own local housing fund. That sends a strong signal to our state and federal elected officials that housing affordability deserves their active support and leadership”