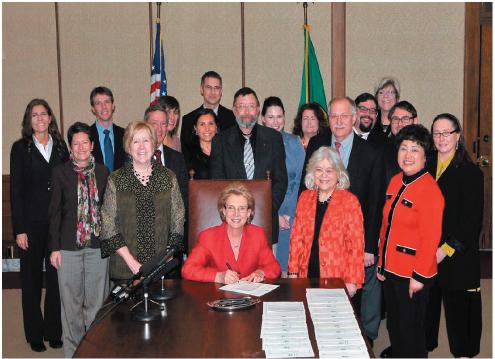 Despite two very challenging 2012 legislative sessions, the Washington Low Income Housing Alliance and it supporters celebrated huge victories this spring, extending and increasing an expiring document recording fee that funds programs to reduce and prevent homelessness, and securing $67.1 million for the Housing Trust Fund, $1.8 million for affordable housing from a set aside fund, and $25 million in weatherization funds. Additionally, the Housing Alliance was able to pass fair tenant screening legislation and save an important emergency housing program, Housing and Essential Needs, from elimination.

Entering the 2012 regular legislative session with a proposed Governor’s budget calling for $2 billion in cuts, the Housing Alliance anticipated that to protect and expand state support for affordable housing would take an unprecedented advocacy effort. The resolve of the Housing Alliance was tested early, when a late January freak snow and ice storm shut down western Washington and forced the Housing Alliance to cancel its lobby day at the state capitol. But housing, homeless and poverty advocates from across the state rallied with amazing vigor and persistence, successfully making the case for housing throughout both the regular and special legislative sessions. 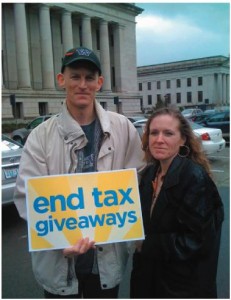 Advocates at the Capitol in Olympia, Washington.

“Our folks testified, wrote letters, called, sent emails, visited their lawmakers in person, collected testimonials, and facebooked to make sure that housing and homelessness issues were on the radar in a way they have not been in the past,” said Housing Alliance Director of Policy and Advocacy, Michelle Thomas. “Because of the incredible advocacy from our members, and because we had legislative champions in the House and Senate who refused to let affordable housing be bargained away, we were able to expand housing opportunity at a time when people need help with housing more than ever.”

The first victory was the passage of the Fair Tenant Screening Act, SSB 6315. After years of effort, this bill marks significant progress towards eliminating the barriers to housing that the tenant screening industry creates. The bill requires landlords to provide tenants with information on the tenant screening company being used and the criteria being used to accept or deny tenancy. Additionally, the bill creates a stakeholder group to examine solutions to the remaining issues including the reporting of eviction and domestic violence records and the high cost of the tenant screening reports.

The second major victory occurred in March, with the passage of HB 2048/SB 5952, which extended the sunset of a $20 document recording fee that funds programs related to ending homelessness. The $20 fee, that was set to expire in 2013, will be extended by four years and a new $10 fee will be added to help make up for lost revenue to state and county homeless programs. In addition to filling a revenue gap, the new fee is intended to help increase cooperation between state & local governments, service providers and private landlords and is set to expire in 2015 to evaluate its success.

In addition to extending the document recording fee, the two major revenue bills that passed, SB 6074 and SB 5127, allocated $93.9 million for affordable housing, including the $67.1 million to the Housing Trust Fund.

Realizing that protecting the most vulnerable was especially important to legislators this year, the Housing Alliance strategically focused its messages to illustrate that the Housing Trust Fund primarily serves people with the lowest incomes. To get their message out, the Housing Alliance cultivated strong messengers and powerful stories. People who are experiencing the housing crisis participated in press events and delivered testimony. The Housing Alliance gathered stores from people and social services agencies across the state, but especially in districts represented by key budget writers, about how proposed cuts would impact and harm lives and communities, and presented the stories to legislators.

Industry professionals including architects and for-profit builders also told their lawmakers about the jobs they create with state investments in housing.

As it became clear in March that stalled budget negotiations would require the Washington Legislature to go into a special session, the Housing Alliance realized it had to double down on its advocacy efforts. The Housing Alliance arranged special advocacy mobilization calls that included key legislative champions. The goal of the calls was to encourage advocates to maintain their intensity. During an April call, Senator Sharon Nelson made a statement the Housing Alliance turned into a rallying call: “You can never send too many emails — it is ok to repeat yourself. We don’t want those who oppose funding the safety net to be louder — your roar must be louder than theirs!”

With the current $67.1 million allocated to the Housing Trust Fund, a total of $118.9 million is available for the biennium, which will help build or preserve some 1,832 affordable homes.

“Working together and with the legislature, we won new investments in safe, healthy and affordable homes, we secured funding for the services that prevent and end homelessness, we passed legislation that eliminates some serious barriers to housing, and we protected critical safety-net services from cuts,” said Alliance Executive Director Rachael Myers. “As we celebrate these victories, we are already moving forward with plans to build our support for another ambitious agenda in 2013 that will continue to move Washington closer to being a state where everyone has the opportunity for a safe, healthy place to call home.”