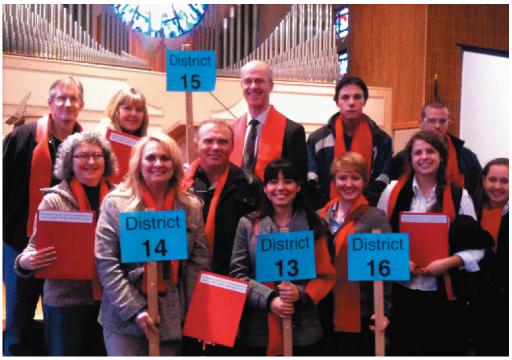 “We believe that harnessing the power of housing and homelessness advocacy in Washington will make our movement stronger and help us achieve our vision that all Washington residents have the opportunity to live in safe, healthy, affordable homes in thriving communities,” said Rachael Myers, executive director for the Housing Alliance.

Beginning in October the Housing Alliance and the Coalition for the Homeless became one organization, operating as the Washington Housing Alliance, and advocating for the continuum of homelessness and low-income housing needs across the state.

“The work of the two organizations is already closely tied and we will be even stronger when we come together formally,” said Troy Christensen, Board President of the Coalition for the Homeless. “We’re excited about joining the two organizations. We expect the merger to make us more effective advocates for ending homelessness and providing an affordable home for everyone in Washington.”

The next stages of the merger will include strategic co-branding of the Housing Alliance and Coalition for the Homeless in the short-term, to ensure that constituents of both organizations remain involved and connected. The merged organizations will have a joint housing and homelessness state legislative agenda for 2012, and a coordinated advocacy strategy to support the full range of low-income housing needs, from supportive housing for people leaving homelessness to ensuring low-wage workers can afford to live near their jobs, to maintaining and preserving home ownership opportunities for low-income families. The Housing Alliance will also continue to convene an annual conference on ending homelessness, and maintain the state-wide, grassroots advocacy networks that made both organizations effective.

“The reality is that the Housing Alliance and the Coalition for the Homeless are already part of each other’s families, so many of the ‘changes’ in the merger are just strengthening a relationship we have had for a while,” said Linda Hugo, Board President of the Housing Alliance. “ The more we looked at the possibility of a merger, the more we could see natural alignment and the potential that comes with speaking with one voice on housing and homeless issues.”

The Board of Directors of the Coalition for the Homeless and WLIHA had been working towards the merger for more than a year. The Coalition for the Homeless board entered into conversations with the Housing Alliance about the possibilities and challenges related to a merger. The goal was to ﬁnd a balance so that homeless issues would not be lost in the wider range of housing issues. Many of the Housing Alliance’s members do not speciﬁcally work with homeless populations, and often have separate advocacy priorities. Another major challenge was that the board representation was structured quite differently in the two organizations.

“In the end I think we all felt that we could address the balance and structural issues by having thoughtful representation on the board and by having advisory groups that could be track speciﬁc issues and give them the attention they deserve,” said Hugo. “The guiding principle was that the work of both organizations is vitally important, and we needed to focus on what would allow the goals of both organizations to be realized instead of allegiances to past structures.”

NEXT Campaign for a Virginia Housing Trust Fund is Launched