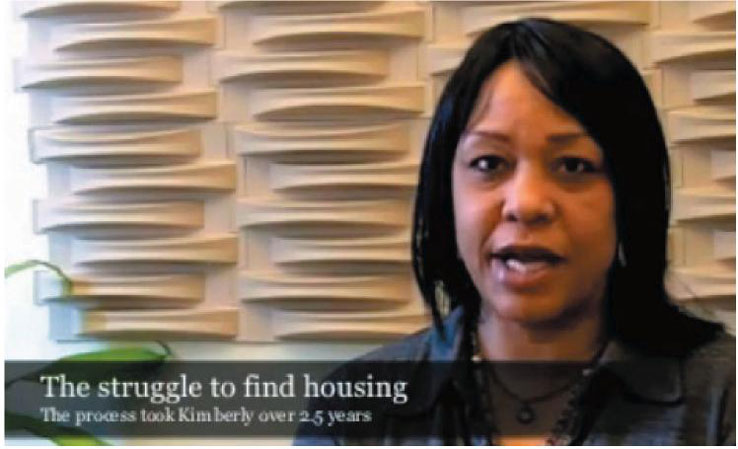 “You have a powerful story to tell.” So reads the tagline to The Homes for All Storytelling Project, a burgeoning new advocacy effort of the Washington Low Income Housing Alliance (Housing Alliance) intended to capture the stories of people who need or who beneﬁt from affordable housing.

The Storytelling Project is an initiative to urge elected ofﬁcials and leaders to strengthen communities and ensure access to opportunity through affordable housing by sharing video testimonials and personal stories of Washingtonians with elected ofﬁcials.

One video features Kimberly, a single mom who just completed a master’s degree. Prior to getting an apartment with the public housing authority, Kimberly struggled to ﬁnd safe, stable housing for nearly 25 years. She tells the story of her battle with drug addiction, losing custody of most of her children, and a constant cycle in and out of the criminal justice system. One constant during this period of her life was housing instability. In 2004, after multiple waiting lists and many case management programs, Kimberly ﬁnally got a place to call home with a public housing authority. The apartment was safe and clean, and allowed her to turn her life around. She raised her youngest daughter and went back to school. Kimberly concludes her story by addressing elected leaders, urging investment in affordable housing. She asks how many more people like herself would have a chance to thrive if provided the basics of shelter and safety were resolved.

“For years, legislators at the state and federal level have told us that the most powerful advocacy happens when people impacted by affordable housing share their stories,” said Rachael Myers, Executive Director of the Housing Alliance. “As much as we have always used personal stories in our advocacy, we often found ourselves scrambling for stories during advocacy campaigns rather than developing a deliberate strategy to seek out stories year round. The pur pose of The Homes for All Storytelling Project is to serve as a regular, ongoing incubator of people’s stories.”

The Housing Alliance launched The Storytelling Project on its website in October 2010. People interested in telling their story can either submit it directly via the website, or by calling the Housing Alliance’s Mobilization Coordinator Moque Krape for a phone interview.

In addition to recruiting people on the website, Krape and her colleague also make a pitch for story tellers in most outreach presentations to Housing Alliance members and allies. Housing Alliance staff review story submittals and then select stories for possible video recording.

With dvds of people’s stories in hand, a delegation of Housing Alliance staff traveled to Washington, D.C. to meet with their Representatives and Senators during the March 2011 National Low Income Housing Coalition conference. “What we found informative was that in every meeting, when we asked staff what resources would be the most useful to them, we heard STORIES over and over again,” said Krape. “Stories are needed to fully illustrate the need and importance of affordable housing.”

The Housing Alliance has also used video in its advocacy efforts in the 2011 state legislative session, both as a tool to move elected ofﬁcials and to mobilize Housing Alliance members. The Housing Alliance included links to the story videos in emails to member organizations promoting its Housing and Homeless Advocacy Day. A record 550 turned out, which in part Krape attributes to the Storytelling Project stories.

“The stories not only inspire elected ofﬁcials and decision makers, they inspire our movement,” said Krape. “When we hear and understand the real life challenges of fellow people who do not have safe, stable housing, it motivates us to work for change. When we hear how people’s lives turn around when they have a place to call home, we know our work will make a difference to real people.”

The Housing Alliance still does substantial work to pull facts and numbers together to illustrate Washington’s need for housing, but the Storytelling Project increasingly serves as a primary advocacy tool. Krape explains that data alone fails to capture the human impact of decisions about housing funding. The testimony of a mother going through foreclosure touches people in a different way than the incidence of foreclosures in the state because it grounds elected ofﬁcials in her personal experience. The complexity and challenge of trying to save for move-in fees and deposits while earning low wages cannot be captured in a spread sheet. Moreover, in the process of collecting stories, the Housing Alliance is also identifying and developing leaders.

“One of the great side beneﬁts of having people tell their story on video is that the experience is empowering for the story teller,” said Krape. “Being ﬁlmed is an afﬁrmation that your story matters, and is part of a bigger story that needs to be told. Further, by sharing your story you make connections and bonds with people. What we are building is not just a bank of powerful stories for advocacy, but a new group of advocate leaders.”