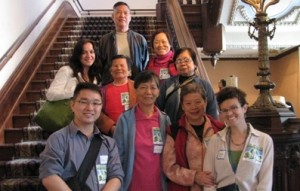 Members of the East Bay Housing Organization rally at the State Capitol for the California Housing Trust Fund.

People can be involved in a housing trust fund campaign in many ways. You need to understand how strongly various people and groups support the idea for a housing trust fund so you can assess who should be involved and how much they might be willing to do. Here are a few categories that might help as you think about who the players may be and how involved they may become:

How to involve groups in the campaign

Bring together those who are talking the most about the housing trust fund idea. If this is primarily an existing group, look carefully at its membership. Who else ought to be at the table? Whose problem is this? Who cares about the issue enough to get involved? Make a list of who should be part of the core group. From this group, the other lists can be developed.  Creating a coalition solely to develop a housing trust fund enables careful selection of members and naturally encourages consensus on the goals since the members come together for a specific purpose.

Almost everyone knows who a community’s key housing advocates are. This is where you begin. Just one person can start this process. Indeed, many trust funds have been initiated by one person, who then pulls in many others.

Every community has its turf issues and rivalries. Deal with these at the beginning so they don’t destroy the campaign as issues heat up.

There are some simple but important things you can do to get your housing trust fund coalition off to a good start. Here are a few suggestions:

Expanding the Coalition —  Getting Others to Support or Endorse Your Proposal

The more support you can demonstrate for your housing trust fund proposal, the more likely you will succeed in getting it passed. Think about both the number of allies you can get to support the trust fund as well as specific people or organizations that will be influential.

Building support requires that you be sensitive to people and the different ways they may be willing to get involved. Some people will actively support your campaign and be willing to help do the work. Others, though solid supporters, will never do more than lend you their names. Don’t dismiss any opportunity to gain supporters, no matter how much or how little they will help. Be open to different levels and types of involvement.

Once your proposal is complete and you are ready to launch the campaign, it is time to look to others who might help. Obviously, they must support the campaign and your proposal.  You are not inviting significant changes in the consensus you have already reached. Consider but do not stop at these possibilities:

When do we approach the opposition?

Opposition generally comes from those who do not want the proposed revenue source to be tapped for a housing trust fund, do not support dedicating any revenue source, or oppose any government support for lower income housing. There is no guarantee that inviting your enemies into the fold early on will ease their opposition. It will only do so if you have an effective strategy for dealing with the basis for their opposition. Thus, you need to understand their point of view. Moreover, you need to be able to effectively reach and communicate with those who truly represent the opposition. All this requires considerable planning. Do not assume that by including them, your problems will be solved. It is very unlikely.