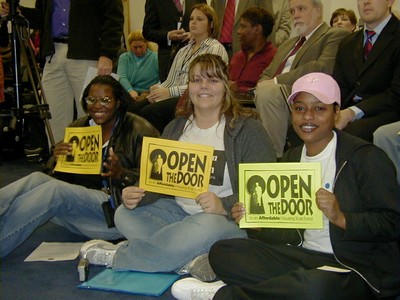 But the proposal is not cast in stone and will probably be subject to further revisions. Negotiation is a normal part of the political process. From this point on, a careful balance must be maintained. If, at any point, moving the housing trust fund forward means compromising too much of your proposal, the campaign may not be worth it. This would include removing or weakening any element that will make the housing trust fund something you don’t want to support or that won’t achieve the objectives you set out to address. You might be asked to broaden the income targeting, or to accept a lower amount of dedicated revenue, or to create a fund that revolves its funds through a loan program. Having to constantly evaluate trade-offs such as these makes it crucial that your coalition be united behind the housing trust fund proposal you have developed.

Critical Campaign Decisions — How grassroots will the campaign be?

How many neighborhood people who care about the campaign’s goal can become leaders in this effort? A housing trust fund campaign can not only be a very empowering experience, it can be a long-lasting win for neighborhoods. Early grassroots involvement may also evolve easily into a monitoring role to ensure the trust fund does what it is intended to do.  The potential for grassroots involvement will depend entirely on the nature of the organizations that make up the core group intending to carry out the campaign, that is, whether any operate as grassroots groups. There are several different organizing strategies or theories that help define how grassroots organizing can best take place.

Grassroots involvement is not something you can attach to a campaign later just because it would be helpful. It needs to be in place when initial decisions are made about the objectives and nature of the campaign.

The grassroots campaign. Some campaigns are driven entirely by a community organization with leaders coming from the neighborhoods. While this is the base for the effort, it does not mean that others are not involved. But most of the work is done by volunteers, staff of community groups and others who can devote their time and energies. These campaigns tend to take place where the political arena is not naturally supportive of the housing trust fund concept and must be persuaded, thus the need for the kind of public pressure that a grassroots campaign can provide.

The coalition or working group campaign. This is probably the most common form of housing trust fund campaign. But coalitions come in many different forms and shapes. They differ in their membership: they can involve the full range of interests in affordable housing, including or excluding public (government) members, or they may be driven primarily by those involved in and advocating for affordable housing, such as nonprofit community development organizations, service providers, and other advocates. The coalition can be formed to create the housing trust fund, after which it will dissolve, or it can be an existing coalition that takes up the cause of a housing trust fund.

The task force campaign. In some places, where the need for the fund has already  been recognized, a task force will be appointed to develop recommendations for starting the trust fund. This works best where there is strong and evident political will to support the recommendations. Usually the Task Force does not carry out a campaign … they only develop the recommendations. Thus, there must be willingness to implement (including put into law) the Task Force’s recommendations. Task Forces usually result from government action, meaning an elected official makes the appointments. However, there have also been effective task forces put together by a public agency, such as a housing and community development department. There have even been private task forces that represent service providers or others.

The planning process campaign. Some housing trust funds have resulted from a government agency deciding to evaluate and develop an effective housing policy. In assessing the community’s housing needs and resources, the agency concludes that a housing trust fund is needed. At times, trust funds are justified as a response to the requirements of housing and planning laws that require government to develop a plan and address existing needs. These are the least campaign-like efforts.

Many housing trust fund campaigns have begun as one type of campaign and evolved into another—or incorporated part of another—because it became strategic to do so. In fact, the task force model can be a fall-back position if it becomes impossible to get the housing trust fund itself passed.  In this case, establishing the task force, with carefully crafted guidelines, can be the optimal next step to take.

While every campaign is different, there are three general steps critical to waging a successful campaign:

Your background research and the policy rationales that you develop for your housing trust fund proposal will be an essential part of each of these stages of the campaign, and your coalition will have to work together to outline the specific strategies and actions you will undertake to implement each step. It is well worth investing time on these activities at the initial stages of the campaign.