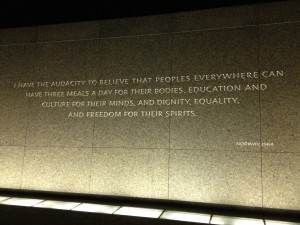 When we frame affordable housing with commonly held values, we most effectively make the case for why housing matters.  Values-based framing is the process of connecting an issue to deeply held American values.  Instead of trying to convince people to believe something new, the goal is to frame your issue in a way that aligns with and connects to what people already believe.   By tapping into people’s values, we can more effectively engage and inspire them to action, whether we are trying to move an elected official or a decision maker, members of the media, the general public, and even potential allies and coalition partners.  Over time, the disciplined use of values-based frames can entirely change the conversation around an issue, creating new possibilities for policy advancement.

Framing:  The term frame is used by linguists, cognitive scientists and communications experts to describe the way in which people interpret facts and information.  Like a camera frames the subject of a photo, all of us have frames through which we see the world.  These frames shape and focus our understanding, including how we respond to ‘facts’.  Frames function like pre-set narratives, in which we can quickly fill in the blanks to make sense of the world around us.  People develop frames from life learning and experience. Once a frame is established, it typically reinforces itself and becomes more powerful over time.  That said, frames can be influenced and changed.  By understanding the frames through which people form their beliefs about affordable housing, we can develop messages that utilize and cultivate frames that build positive support for affordable housing.

Values:  Values refer to deep, widely held beliefs about what is important.  Most people living in the United States have a set of shared values that include freedom, self-determination, reward for effort, opportunity, fairness, equality, justice, independence, personal responsibility, and the responsibility to care for the most vulnerable.  These values inform the frames that most strongly shape our world view.  Linguist George Lakoff and the Berkley Media Studies Group have a model that compares values-based frames to other frames in terms of influence of how people feel on a given issue.

The concept is that frames that tap into Level 1 values trump frames that use Level 2 issues or Level 3 policies arguments. Historically, most affordable housing advocates have made arguments that hinge on Level 2 and Level 3 frames.  Public opinion research shows that connecting housing to Level 1 frames like opportunity, fairness, reward for work, security, stability and responsibility to care for the most vulnerable greatly strengthen the power and influence of arguments for affordable housing.

Using values-based frames also allows advocates to let go of the jargon and data that are central to almost every Level 2 and Level 3 argument, and to speak more from a place of passion and moral authority.  One of the greatest assets we have as affordable housing advocates is our passion.  Values-based framing helps us capture and express our values so that our passion becomes contagious.

For some examples of housing messages developed with values-based frames, click on Oregon, Washington and Illinois.

For a case study that explores values-based messaging and how it worked for advocates in Oregon, click on Moving Head to Heart: Using Media Advocacy to Talk about Affordable Housing.   For an article about how values based framing helped move a public health debate, click on More than a Message: Framing Public Health Advocacy to Change Corporate Practices.

Click here to go to next page–public opinion research