The Non-Profit Housing Association of Northern California (NPH) worked with community partners to win three County ballot measures delivering $2 billion in affordable housing funds around the Bay area in the November 2016 election, with Measure A (Santa Clara County), Measure A1 (Alameda County) and Measure K (San Mateo County).  Most of these local measures not only achieved but blew past the state’s supermajority (66.67%) requirement for taxing and bonding measures.

Furthermore, November 8 brought even more local victories for the affordable housing movement with the voters of Berkeley and East Palo Alto overwhelmingly passing increases in the business license tax paid by owners of residential rental property, for the purpose of funding affordable housing and homelessness prevention, as well as 76% of San Francisco voters approving Prop C, a $261 million bond reauthorization, and 74% of Oakland voters approving Measure KK, a bond that includes $100 million for affordable housing.

“This news is particularly heartening in light of the deep polarization coming out of Election Day. In a time of deep division, affordable housing has shown itself be an issue of unity. Voters overwhelmingly got behind the idea of helping our friends, neighbors, and families – not just here in the Bay Area, but around the nation,” said Amie Fishman, NPH Executive Director.

NPH and local coalition partners had success by evaluating the political landscape and developing robust organizing opportunities. Earlier in 2016, California voters reported to pollsters that the number one issue they wanted addressed in their community – above schools, safety, healthcare and even traffic – was affordable homes. Yet, drastic state and federal budget cuts to affordable housing over the last several years has reduced affordable housing opportunities. Voters’ appetite created a ripe opportunity for NPH and advocates around the Bay to get ballot measures introduced and passed by overwhelming margins.

By the end of the campaign, NPH members increased resident voter registration by more than 15% — registering more than 8,000 new resident voters — and distributed more than 11,000 fliers in 7 languages to residents across the Bay Area. 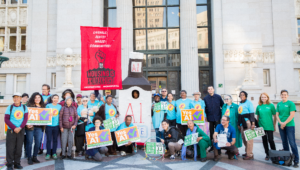 Furthermore, NPH member executive directors and staff stepped forward to make calls, put up door hangers, and ensure every vote was counted in the lengthy mail ballot tabulation process. An example of the importance of electoral organizing can be seen by the tight vote margin in Santa Clara County where Measure A won by only 8,000 yes votes. The 14,000 registered residents of NPH’s partner organizations was a significant factor in that win.

“There is clear, consistent, and strong support for investments in affordable housing and leaders should take note,” said Amie Fishman, NPH Executive Director. “Affordable housing should be a top policy issue for all elected leaders, at every level of government moving forward.”

In Berkeley voters passed Measure U1 by a margin of 75% to 25%. U1 raises the business license tax on residential rental units by 1.8% of gross receipts, from 1.081% to 2.88%, with an exemption for small landlords with less than 5 units and a temporary 12-year exemption for new construction. The measure will cost the average landlord $30 per unit per month and raise $4 million annually for affordable housing and homelessness prevention.

The U1 Campaign had an impressive number of supporters from the City Council, the Mayor, and many housing, homeless organizations and other progressive groups and citizens.  They still faced opposition from landlords.  So much so, that the landlords put an opposing initiative, Measure DD, on the ballot as well.  The landlords knew that there was support for increasing the business license tax, but they attempted to muddy the water with voters by putting a watered down version of U1 on the ballot.  Advocates educated voters and got out the vote so that Measure U1 passed overwhelmingly and Measure DD was defeated by almost the same margin, 29% yes and 71% no.

U1 is a majority-vote general-purpose tax, but directs the Housing Advisory Commission, a citizen oversight committee of people with expertise and experience in affordable housing and homelessness prevention to advise the City Council on how to spend the money. The tax cannot be passed on to tenants. Most tenants are protected by the city’s Rent Stabilization Ordinance.

East Palo Alto Voters passed Measure O by a margin of 78% to 22%. Measure O was closely modeled on U1 and is expected to raise $600,000 a year. It was placed on the ballot by a 4 – 1 vote of the City Council. It had no organized opposition.

Stephen Barton, retired Berkeley Housing Director and Co-Chair of the Berkeley Measure U1 campaign was quoted on the Fund for Affordable Housing website: “The ballot measures in Berkeley and East Palo Alto are based on an important economic principle.  The real estate industry has a saying that the three things that determine whether real estate will go up in value are ‘location, location and location’. But it’s not the landlords who make locations in the Bay Area valuable. It’s the public, homeowners and renters alike, who make it valuable by investing in the public services such as education, parks and transportation, preserving our beautiful natural environment and creating a diverse and creative culture that encourages innovation and a thriving economy. Then real estate investors get to charge tenants higher rents for value that is created by the public. Nothing could be more appropriate than to tax this unearned income and reinvest it in affordable housing and preventing homelessness for the tenants who are most harmed by high and rising rents.”

For more information on the Measure U1 and Measure O campaigns contact fundaffordablehousing@gmail.com