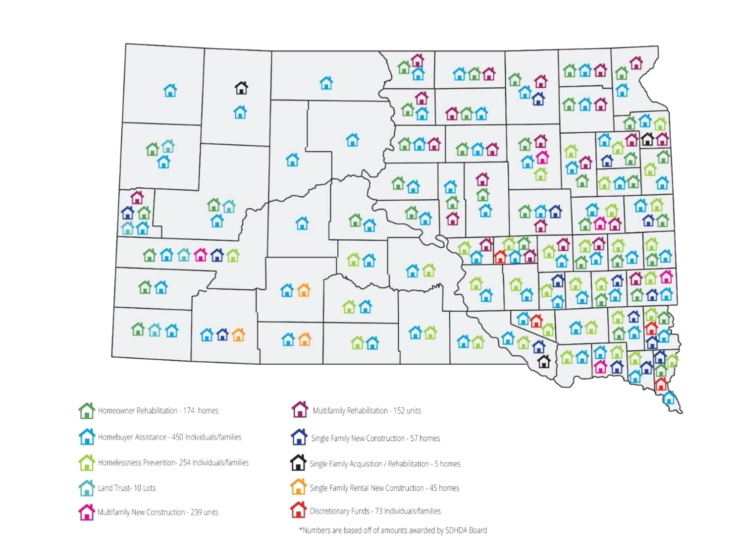 The Housing Opportunity Fund provides state funding for new construction or the purchase and rehabilitation of rental or home ownership housing, housing preservation, including home repair grants and grants to make homes more accessible to individual with disabilities, homelessness prevention activities, and community land trusts. Eligible applicants to the Housing Opportunity Fund include for-profit entity, nonprofit entity, tribal government, housing authority, political subdivision of the state or agency of such subdivision or of the state is eligible to apply for funding. The Building South Dakota legislation mandates that 30% of the Housing Opportunity Fund goes to municipalities with a population of 50,000 or more and the remaining 70% to other areas of the state.  Up to ten percent of the funds may be used for administrative expenses.  In order to insure that all applications are represented equally the application scoring system used will make considerations with  40%  funds supporting rental housing; 40% supporting homeownership and 20% percent committed to other activities.  SDHDA has the flexibility to review the scoring system and adjust as needed.

In order to direct 35% of Building South Dakota funds to the Housing Opportunity Fund, HB 1173 redistributed funding from the Economic Development Partnership Fund original 15% to 5%. The remaining funding allocations remained the same: 30% to the Workforce Education Fund, 25% to Local Infrastructure Improvement Fund and 5% to the Revolving Economic Development and Initiative Fund. 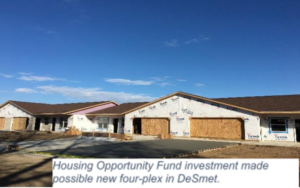 The legislative support for expanding the portion of the Housing Opportunity Fund is based on the track record of production the fund has had in communities throughout the state.  Since it was established in 2013, the Housing Opportunity Fund have made
investments in housing programs that have impacted every county in the state, constructing new affordable rental and ownership housing, as well as rehabilitating existing rental and ownership housing, providing down payment assistance, and supporting homeless prevention programs.

When the window opened during session to expand the percentage of Building South Dakota going to affordable housing, the Homes coalition snapped into action, making personal visits, emailing and calling key legislators with stories of the Housing Opportunity Fund’s success. HB 1173 moved through the South Dakota House and Senate with strong bi-partisan support, and was signed in law by the month’s end.

The Homes for South Dakota coalition was also backing legislation that would have dedicated additional funds to the Housing Opportunity Fund that would replace the funding that was lost when the revenue from Unclaimed Property was removed as a funding source for Building South Dakota. The coalition will continue to advocate for additional dedicated revenue in 2018.