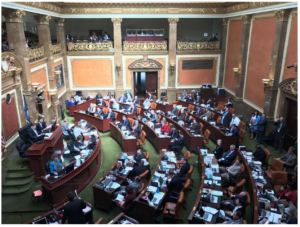 This session Utah lawmakers allocated new money for affordable housing efforts.  Lawmakers passed Rep. Becky Edwards’ sponsored House Bill 36, which will allocate a little over $2 million to new investment fund and a fund for landlords willing to convert their existing stock into lower-priced rental units and close to $7 million in tax credits over 10 years to affordable housing projects.  These measures are in addition to the $2.2 million state legislature allocation to the Olene Walker Housing Loan Fund.

Lieutenant Governor Spencer Cox created the Affordable Housing Task Force last year to assess the need for affordable homes in Utah and find solutions.  A large group of stakeholders participated in the task force resulting in a report by the Department of Workforce Services.   Lieutenant Governor Cox said the report presented shows “the serious need for more affordable housing in Utah.”  According to the state’s first Affordable Housing Assessment and Plan, the number of Utah’s extremely low-income families exceeds the rental units they can afford by more than 38,000.

The biggest need in the report was for the development of housing for household at 30 percent of AMI.  HB36 directly addresses this need along with incentivizing landlords to rent to low-income tenants as well as increasing the tax credit program in the state.  The details of Rep. Edward’s bill:

“This is really a crisis,” Rep. Edwards said talking about why she sponsored HB36. “We cannot move people out of homelessness until they have a place to live. That’s what this bill does.”

Tara Rollins, executive director of the Utah Housing Coalition, said the approved funding is less than they had hoped for, but it’s a start. “I think they’re seeing the need to do more,” she said. “I’ve always said we need to break down the silos, and work together so we can all have a win.”

The Olene Walker Housing Loan Fund (OWHLF) partners with public and private organizations to create and preserve affordable housing for Utah’s low-income community. To achieve this goal, the Housing and Community Development Division (HCD) and the OWHLF Board have eight OWHLF-funded programs and initiatives that support the construction, rehabilitation and purchase of affordable multifamily and single-family housing throughout Utah.