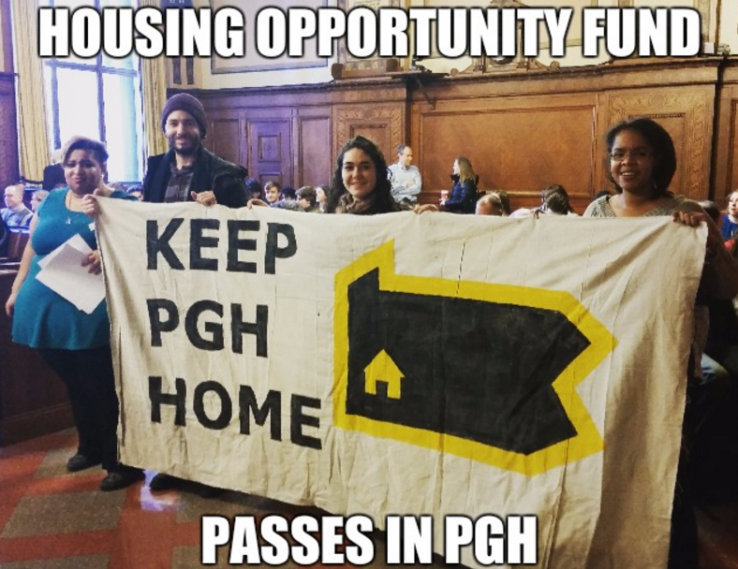 By a vote of 7-0, on December 20, 2016 the Pittsburgh City Council established the Housing Opportunity Fund to support the preservation and development of affordable and accessible housing and the prevention and reduction of homelessness. The Fund, which represents the first City-wide affordable housing policy for Pittsburgh, is intended to provide resources to help stabilize and improve Pittsburgh’s neighborhoods by supporting the development and preservation of affordable and accessible housing in areas with access to public transit, jobs, good schools, child care, grocery stores and other amenities, with a priority for communities experiencing rapid growth and escalating housing costs, and for seniors, people with disabilities, and families with very low incomes.

Pittsburgh is experiencing an economic resurgence that includes new investment and revitalization that while beneficial to some is creating new challenges and exacerbating historic inequities in the housing market, particularly for families and individuals with the lowest incomes. Responding to this community crisis, a coalition of community and advocacy organizations led by Pittsburgh United worked with a City appointed Affordable Housing Task Force led by Councilman R. Daniel Lavelle to build Council support for establishing Housing Opportunity Fund as a core component of Pittsburgh’s housing strategy.

While the ordinance creating the Housing Opportunity Fund does not include any revenue, City Council declared its intent of a fully capitalized Fund with at least $10 million per year in annual revenue by 2018, with a commitment of at least $5 million in 2017.  The ordinance also states Council’s intent that the Trust Fund provide net new resources for affordable housing in the City of Pittsburgh, and that the Fund not be used to substitute or supplant existing resources. Further, once capitalized, any assets remaining in the Fund at the end of any fiscal year shall be carried into the next fiscal year, including all interest and income earned, as well as any repayments or forfeitures of loans and/or grants.

“Everyone deserves an opportunity to benefit from Pittsburgh’s new prosperity and growth, and creating the Housing Opportunity Fund is a major step in the right direction for the city of Pittsburgh,” said Celeste Scott, affordable housing organizer for Pittsburgh United. “Now we can turn our focus to passage of the 1% increase in the Realty Transfer Tax, which is necessary to allow up to 6,000 families a year to receive housing assistance, make home repairs, or purchase a first home.”

A 1% increase in the Realty Transfer Tax would produce an estimated $9 million annually for the Housing Opportunity Fund, the highest annual revenue projection of the more than nine revenue sources identified by the Affordable Housing Task Force as a potential dedicated source of funds, and the closest to the City’s goal of $10 million annually. Another revenue sources under consideration include tax revenue from expiring TIF (tax increment financing) which would generate an estimated $3 million.

In addition to Pittsburgh United, the housing trust fund coalition includes SEIU 32BJ, SEIU Healthcare PA, Pennsylvania Interfaith Impact Network, Regional Housing Legal Services, Northside Community Development Fund and Action United. Coalition members actively participated in the Affordable Housing Task Force, helping to shape the recommendations for a housing trust fund for the city, as well as engaging and educating members of the City Council on the potential impact of a housing trust fund in Pittsburgh.  In addition to their inside strategy, the coalition built significant public support for the housing trust funds with a combination of educational forums, visible actions, media advocacy, and a signature gathering initiative during the summer of 2016, when the coalition was considering putting the  housing trust fund on the November ballot. In under fifty days, coalition members collected 13,108 signatures, eclipsing the 7,000 signatures required to appear on the ballot.  While the coalition opted not to go to the ballot, the direct engagement of the public clearly demonstrated that the people of Pittsburgh wanted the city to act to increase the housing options for low income families and people in danger of being priced out of the city they call home.

Housing Opportunity Fund eligible activities for the preservation of existing affordable housing include: home rehabilitation or repair, homeownership counseling pre or post purchase, foreclosure prevention and mitigation, tangled title assistance and energy efficiency, a tenant purchase fund that supports tenants in the process of acquiring a controlling interest in expiring affordable housing developments, the preservation of Deed Restricted Affordable Housing, construction or rehab of owner-occupied homes in high-vacancy neighborhoods, and purchase and rehabilitation of vacant structures by Neighborhood-Based Non-Profits for affordable homeownership.

The Housing Opportunity Fund also supports the following activities that prevent or reduce homelessness: rental assistance, rapid re-housing, permanent supported housing, housing first  and/or other homeless housing purposes, especially for youth, families, seniors, veterans, people who are chronically homeless and those with disabilities.  The fund may also be used for the rehabilitation of rental units in exchange for enforceable commitments to accept rental assistance and provide housing for special needs populations.

The Urban Redevelopment Authority (“URA”) will administer the Housing Opportunity Fund. Specific duties of the URA include technical review and underwriting of proposals, construction review and monitoring, approval of draw requests and disbursement of funds, loan management and servicing, reporting, and compliance monitoring and enforcement. Up to 10% of Fund assets may be used for administrative expenses, which shall include but not be limited to the URA’s cost of administration and the preparation of the annual audit and report by an Advisory Board. The Advisory Board includes designated slots for community based organizations and nonprofit housing developers, residents of affordable housing, a homeowner with an income at or below 80%AMI, and either a person who is homeless, formerly homeless, has a disability, or is an advocate for persons who are homeless and/or have disabilities, as well as representatives from the Mayor’s Office, City Council and the URA.

Funding awards will be made through a competitive application process that will consider depth of affordability, length of affordability commitments, geographic distribution, historical disinvestment in the neighborhood where the project is located, affirmatively furthering fair housing, accessibility features, and energy efficiency. For projects with 20 or more units, special priority shall be given to developments located in areas with access to frequent transit and walkable/bike-able streets, as identified in an Annual Allocation Plan.

“The City Council has created a tool to provide the beginning of an affordable housing solution that our communities need, and now we need put that tool to work, and that means committing the $10 million annually to the Housing Opportunity Fund so that it can function as Council intended,” said Scott.  “The stakes are high in Pittsburgh, with families already displaced, rent-burdened or forced to make horrible choices between rent and basics like groceries, medicine and utility bills. For these families, the clock is ticking and Council action cannot come soon enough.”

To learn more about the Pittsburgh Housing Opportunity Fund and the campaign to secure dedicate revenue, contact Celeste Scott at Pittsburgh United via email or 412-231-8648.

NEXT Baltimore Voters Supports Housing for All