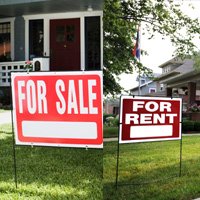 A new national survey on attitudes about housing indicates a significant shift in perceptions of home ownership and rental housing, including growing support for a national housing policy with a greater focus on rental housing.  For decades the majority of the American public has equated home ownership with the American Dream.  3 in 5 adults (61%) who participated in the survey believe that “renters can be just as successful as owners at achieving the American Dream,” and an even higher percentage of respondents believe that national housing policy should support equally renters and homeowners. 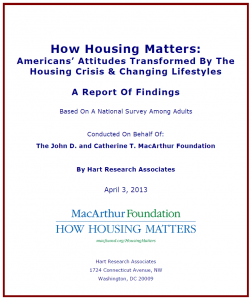 Commissioned by the John D. and Catherine T. MacArthur Foundation, Hart Research Associates conducted telephone interviews of 1,433 adults between February 27 and March 10. In addition to the changing attitudes about home ownership and rental housing, nearly 8 in 10 (77%) survey respondents believe we are still in the middle of the housing crisis, or that the worst is yet to come.

“While the desire to own a home remains a bedrock principle in American life, this survey demonstrates that the American public’s views about housing are changing, in part due to the hangover from the housing crisis, but importantly, also because of changes in our lifestyles. The dynamic is no longer simply ‘renting versus owning’ – perspectives are more complex, and people are viewing housing in a more holistic way,” said Peter D. Hart of Hart Research Associates. “Many of the positive attributes that have long been associated with homeownership are fading, and on the flip side of the coin, it is remarkable that nearly half of all homeowners can picture themselves one day becoming a renter.

The support for a more balanced national housing policy was fairly consistent across political and social demographics.  Democrats (69%), Republicans (62%), and Independents (65%) all believe that the “focus of our housing policy should be fairly equally split on rental housing and housing for people to own.” This balanced approach toward government policies supporting both rental housing and homeownership shows similar support among all races, ages, regions, and income levels.

“The How Housing Matters national survey shows us that whether one owns or rents, the American public understands the benefits of decent, stable housing in people’s lives – and the consequences for individuals and communities when that stability is lost through events like foreclosure, eviction, increasing costs or unemployment,” said Julia M. Stasch, Vice President of U.S. Programs at the John D. and Catherine T. MacArthur Foundation. “We are pleased to support and release this important national survey, as it complements the Foundation’s efforts to address the nation’s housing challenges through empirical research and organizations focused on improving housing opportunities for all Americans.”

To read more about the survey, go to www.macfound.org.