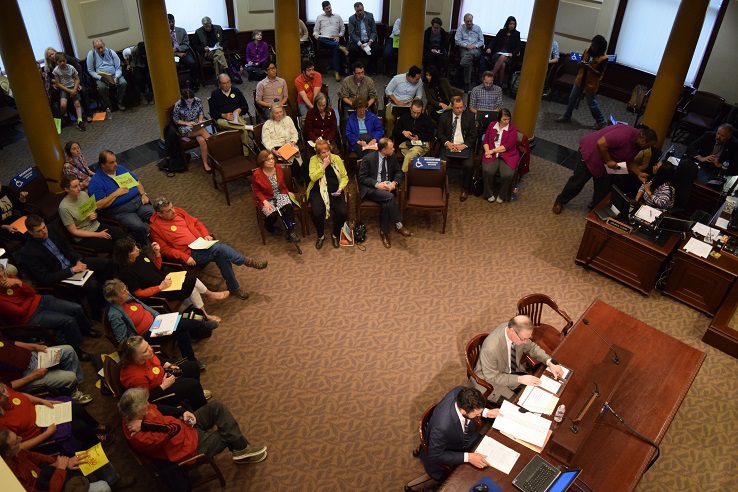 By unanimous vote of City Council, the City of Portland, Oregon established an Inclusionary Housing Fund (IHF) and enacted a construction excise tax that will generated an estimated $8 million for the IHF annually.  The excise tax will be levied on both commercial and residential projects worth more than $100,000 in value, with the collected revenue dedicated to developing homes affordable to households at or below 80% of the area median income. Officials will begin collecting the tax Aug. 1 but will exempt housing built for people with limited incomes.

Portland is facing a severe housing crisis, with rapidly rising rents displacing long term residents, and increasing the number of people experiencing homelessness.  In September 2015, Portland declared a Housing and Homeless State of Emergency, spurring a series of actions from City Council.  In November, the City Council raised the percentage of the Tax Increment Funding (TIF) affordable housing set aside from 30% to 45% of urban renewal funds, and granted additional money to the Housing Bureau.  In December, City Council dedicated at least $1.2 million annually in lodging taxes from short-term rentals (Airbnb) to the city’s Housing Investment Fund.

The City’s secured the ability to establish the construction excise tax with the passage of SB 1533-B in the 2016 Oregon Legislature.  SB 1533-B, which lifts the statewide ban on Inclusionary housing as well as permitting the construction excise tax to address affordable housing, was the number one legislative priority for the City of Portland.  SB 1533-B allows for local jurisdictions to require developers to designate a certain percentage of new multifamily construction as affordable to those making 80 percent of area median income, in exchange for density bonuses or property tax exemptions. 15 percent of the construction excise tax generated from residential projects are directed to state-run homeownership initiatives and 50 percent to offset incentives for an upcoming mandatory inclusionary zoning program.

With the newly minted authority from the state legislature, and the City Hall Chamber packed with members of the Welcome Home Coalition and other housing advocates, on June 29 the City Council approved an ordinance establishing the construction excise tax and IHF introduced by Commissioner Dan Saltzman.  In an OpEd he co-wrote with a Multnomah County Commissioner published in Street Roots, Commissioner Saltzman wrote: On any given night, about 4,000 people—including women, children, and seniors—will sleep on our streets, in a car or in a temporary shelter. Locally, we have responded to this housing emergency by investing in supportive services that help people get into housing. But everyday our service providers run into the same obstacles that anyone looking for a safe, affordable home in Portland faces: they are very hard to find. Nearly half of families with low incomes (less than $37,000 a year for a family of four) can’t find a home that they can afford because we lack 25,000 affordable homes in Portland. We need to act now to create affordable housing for people who live and work in our communities. We want Portland to be a place where everyone can afford a home. And with thousands of residents living without access to a safe, affordable home, we must do more.

Though SB 1533-B only requires a jurisdiction to dedicate 50% of revenue to affordable housing, Portland’s ordinance commits 100% of the tax collected to the IHF, thanks in part to steadfast leadership from the City Council and from strong public support generated by the Welcome Home Coalition’s #KeepIt100! campaign. The Welcome Home Coalition is comprised of 143 organizations and hundreds of individuals committed to building back the affordable housing infrastructure in the Portland Metro area, with at least 63,000 homes affordable to Metro area families. For the past two years, Welcome Home has built public support for increasing investment in affordable housing through research, education, outreach and community engagement. 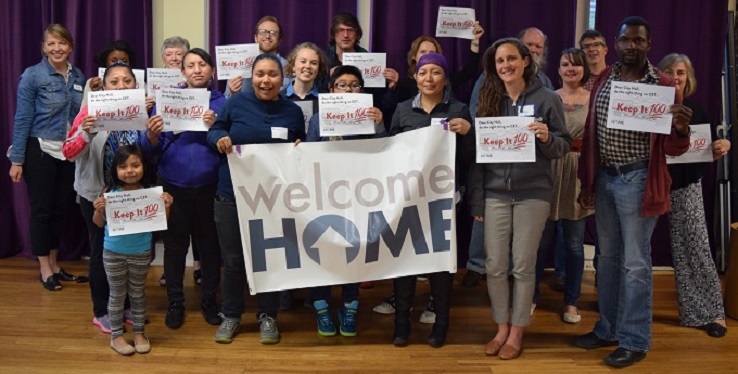 Said Welcome Home director Jes Larson: “This is an important step forward in our city’s comprehensive strategy to address affordable housing needs for Portlanders with low incomes. It’s important that we’re all doing our part to make sure Portland is affordable and now, the booming construction industry will be doing their part to restore affordability and prevent displacement in changing neighborhoods.”

The IHF will be administered by the Portland Housing Bureau, which also administers the Housing Investment Fund, the TIF affordable housing set aside, and Federal CDBG and HOME funds to build and preserve affordable rental and ownership housing.  The Portland Housing Bureau will use the IHF in conjunction with these existing revenue streams to advance the City’s goals to reduce homelessness and increase the number of homes and apartments affordable to low wage workers, people with fixed incomes, and other households being priced out of Portland.  According to Portland Housing Bureau estimates, the tax could generate up to $96 million for the IHF by 2035 and build as many as 960 housing units affordable to those making 60 percent of area median income or below.

Exempted from the tax are affordable housing projects serving those at or below 80 percent of area median income; public improvements subject to public contracting rules; and projects for schools, hospitals, places of worship, agriculture and nonprofit care. Affordable for-sale housing, accessory dwelling units and improvements worth less than $100,000 are also exempt.

In addition to establishing the IHF and construction excise tax in late June, the City Council also unanimously supported Commissioner Saltzman’s proposal to send a $258.4 million bond measure to pay for 1,300 units of affordable housing to voters on the November ballot. The Welcome Home Coalition is helping fuel the Yes for Affordable Homes campaign to support the bond measure. To learn more about Yes for Affordable Homes, go to http://www.yesforaffordablehomes.com/.

For more information about the construction excise tax and IHF, contact Martha Calhoon, Public Information Officer at (503) 823-3239 or Martha.calhoon@portlandoregon.gov