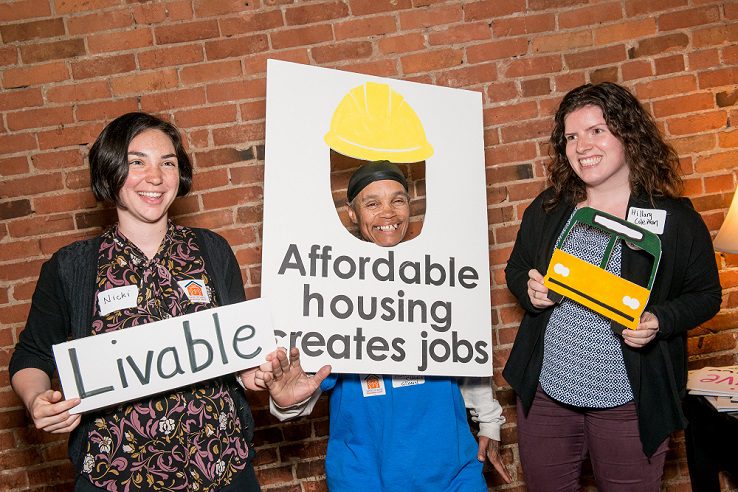 Responding to the growing affordability challenges due to skyrocketing rent and mortgage costs, the City of Seattle is pursuing several strategies to increase housing affordability, including asking Seattle voters in August 2016 to replace and expand the 2009 Housing Levy, which expires at the end of 2016.  Under the proposed 2016 Housing Levy, the city would raise $290 million over the next seven years, double the revenue generated by the $145 million levy supported by a resounding two-thirds of the voters in 2009.  If approved, the proposed 2016 levy would create and preserve 2,150 affordable homes, more than half will serve people who are homeless and other extremely low income residents. The levy will also provide emergency rental assistance to 4,500 households at risk of becoming homeless and provide home purchase loans and emergency repair grants for 280 low income homeowners. A levy of this size would cost the median Seattle homeowner $122 per year – a modest increase of just $5 per month from the 2009 levy.

The strategy to double the levy amount is part of Mayor Ed Murray’s response to the housing crisis which has destabilized the city’s working families, young, and seniors, while contributing the number of people experiencing homeless. The mayor is counting on heightened public support to address the city’s affordability crisis coupled with the three-plus decades of support for the housing levy among voters. Seattle’s voters first approved a housing revenue measure in 1981, with the passage of a housing bond to develop affordable apartments for senior citizens. The success of senior housing, coupled with excellent reporting by the City to the public on what the bond accomplished, set the stage for the passage of the first housing levy in 1986.  Voters then approved new housing levies in 1995 with 55% support, 2002 with 54% support, and in 2009 with 66%.

Consistent support of the Housing Levy is rooted in the City of Seattle’s commitment to inform and educate Seattle taxpayers about how the public funds are used to produce positive housing outcomes in the community. The track record for the Housing Levies is outstanding:  since 1986, levy funds helped create more than 12,500 affordable apartments, assisted more than 900 lower-income families in purchasing their first homes, and provided emergency rental assistance to 6,500 households. The City of Seattle publishes annual reports available to the public on the accomplishments of the Housing Levy webpage:  www.seattle.gov/housing/levy. The levy also requires the review of a thirteen person oversight committee comprised of one City employee appointed by the Mayor, one City employee appointed by the City Council, six community representatives appointed by the Mayor, and five community representatives appointed by City Council. 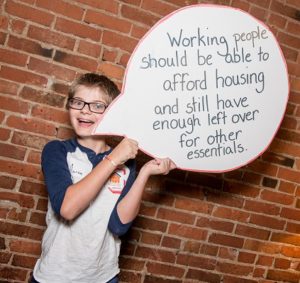 Housing Levy supporters of all ages turned out for the Yes for Homes Campaign Kickoff.

the Housing Levy has established a tradition of voter support that will be essential to winning at the ballot in August.  Efforts to build support among the voters and educate residents about the Housing Levy proposal have already begun:  the Housing Levy webpage includes information about the Mayor’s proposal for the 2016 levy in English, two Chinese dialects, Korean, Somali, Spanish, Tagalog and Vietnamese.  The Seattle Office of Housing has launched a new website, www.underoneroofseattle.com, that highlights the Housing Levy’s impact on children, seniors, and people experiencing homelessness, and how the levy advances the City’s equity agenda.  Yes For Homes!, the official Housing Levy campaign, also has a website, yesforhomes.com, that engages supporters in campaign activities, posts campaign updates, and provides useful voter education materials. On May 4th, Yes For Homes! held a kick-off event, with more than 250 people turning out to support the Housing Levy.

Housing Development Consortium of Seattle King County (HDC), a core organizational member of Yes for Homes, believes the Housing Levy’s record of making a difference will convince Seattle voters to support the increased levy amount.  “As housing costs rise, we continue to see working families and middle-class residents struggling to cope. Some live precariously from paycheck to paycheck, while others are priced out of their homes and communities entirely. Like it or not, we are the 10th most expensive city in the United States,” said Marty Kooistra, HDC’s executive director. “The proposal for replacing and expanding the housing levy is a broadly-based response that focuses on helping our families, young people, and seniors remain in our city while providing important funding for housing and services for people experiencing homelessness. Together, we can continue Seattle’s proud tradition of bringing important change for those who need our help the most.”

In addition to supporting the 2016 Housing Levy, Mayor Ed Murray worked with advocates In November 2015 to secure the approval of City Council support to adopt a Commercial Linkage Fee framework (now called Mandatory Housing Affordability-commercial) tied to all new commercial development as well as propose a mandatory inclusionary zoning program (now called Mandatory Housing Affordability-residential) that are together estimated to create 6,000 affordable homes in the next decade.  The commercial linkage fee is one of the recommendations of the Housing Affordability and Livability Agenda (HALA) Committee which was appointed by Mayor Ed Murray in September of 2014.  Also in November 2015, Mayor Murray and King County Executive, Dow Constantine declared homelessness a State of Emergency, citing the more than 45 people who have died on the streets in 2015 and 3,000 homeless children in Seattle public schools over the 3 course of the year. As part of the declaration, $7 million in city dollars and $2 million in county funds have been added to the annual $80 million the City and County spend on homelessness.

To learn more about the Yes for Homes, campaign go to: yesforhomes.com

To learn more about the 2016 Housing Levy, go to: www.underoneroofseattle.com