Early in 2013 housing advocates in California met to form what is now called the Residents United Network (RUN).  Advocates from across the state realized that in order to win needed victories in Sacramento for affordable homes, they need to build more power.  California has a sophisticated housing community including developers of all sizes, as well as state, regional and local associations, and a number of community and service groups all advocating for affordable homes.  How could they build more power: organize with the residents of affordable homes.

Residents of affordable homes are virtually an untapped partner for change in the housing community. In California, the potential scale of this initiative is roughly 1 million people who live in affordable homes making up approximately 300,000 households.  Even if RUN reaches 10% of these households, they would engage 30,000 households in advocacy.  Such a significant voice from residents could have a lasting effect on policy makers.

In 2011 there were more than 6 million people in California below the federal poverty level.  When that number is combined with the high cost of living ($25/hr/ft full-year to afford a 2bdrm apartment) the percentage of Californians on the economic edge is up to 24%.    A February 2014 study by the California Housing Partnership Corporation shows that almost one million very-low-income Californians lack an affordable home.  In addition, the report states “Median rents in California increased by over 20 percent from 2000 to 2012, while the median income dropped by 8 percent, significantly driving up the percentage of income that California households must spend on rent.”

This economic crisis is exacerbated with the shrinking of state and federal revenue for affordable housing.  With the dissolution of some 400 redevelopment agencies across California and the subsequent loss of at least $1 billion a year in funding and the loss of the needed 2/3 votes to get the Homes and Job Act (SB391) through the Senate, state advocates knew more power was needed.  Housing California, their members and regional association partners began thinking about how to engage affordable home residents in state issues.  Initial conversations lead them to reach out to the Center for Community Change’s Housing Trust Fund Project (HTFProject) and local partners engaging residents, such as the East Bay Housing Organization, for support in constructing a strategy to build more power in the state by tapping into the rich resource of residents living in affordable homes. 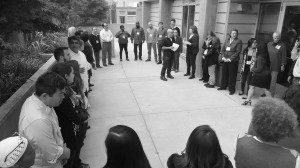 Developing relationships, building trust, and learning together are top priorities of RUN meetings.

Over the past year, core members of the California Residents United Network (RUN) facilitated four meetings with more than 30 organizations.  Of these more than half of the participating organizations have been non-profit housing developers including larger statewide organizations and smaller neighborhood-based groups. Other participants include resident service providers, community organizing groups, and nearly all of the regional and sub-regional trade organizations within Housing California.   Importantly, the last two meetings have intentionally grown to include affordable home resident leaders making up more than 50% of those participating.

Over the last year RUN has developed a common vision, mission, agenda and structure to move the Network forward.  A critical part of developing a common agenda includes demonstrating the power of joint actions.  RUN participants jointly produced a video illustrating its purpose and the power of RUN’s voice.  In April 2014, The Network launched publicly showing the video before more than 1,000 participants at Housing California’s annual conference.   In combination with Housing California’s lobby day, the Network ran a twitter action urging support from Governor Brown for affordable homes with more than 135 tweets from affordable homes residents and other advocates.

Realizing the size of the state, capacity of organizations and the uniqueness of each region and their local issues, RUN is developing regional hubs.  Initially RUN has opted to build out in six distinct regions in California.  Over the next year, the Network will meet four times for planning, training and action, twice a year statewide and twice in each region.

The Network strategy is to build the fieldthroughshared strategies, tactics and knowledge, and to develop replicable models of organizing residents in affordable homes and the broader community. This collaborationwill embrace campaigns at the local and regional levels. And importantly, influence state policies by developing a network of organizations that can respond to opportunities to and engage in activities to advance state housing policies that benefit families and individuals of modest means in California. RUN’s purpose is to provide opportunities to develop the skills of, and build relationships among, resident leaders, frontline staff, developers and advocates in order to coordinate a statewide movement around political, policy and budget activities aimed at providing a safe, stable, affordable home for everyone in California.  The vision is a California where people of low and moderate incomes are actively engaged in public policy decisions.

The participation of resident leaders at RUN’s fourth in-person meeting in March 2014 galvanized the Network.

Over the next year, RUN will have a two pronged approach: civic engagement and state policy. This fall, RUN will hold six regional trainings on voter engagement teaching hundreds of residents the “how-to’s” of voter registration and “get out the vote” activities.  The potential of organizing residents of affordable homes as a voting block is tremendous. Civic engagement is a great way for resident leaders and staff to build their leadership and the constituency of RUN.  The end goals are to register hundreds of low-income people, educate people on voting and housing connections, grow leadership of RUN leaders through candidate engagement and finally to get more affordable homes residents to the polls.

Starting in 2015, the Network’ will employ its second approach of working on state and local policy issues.   Using the methodology of popular education, joint action and base building, RUN members will be constructing an interconnected Network of resident leaders, front line staff and non-profit housing management who will join the movement to provide a safe, stable, affordable home for everyone in California.